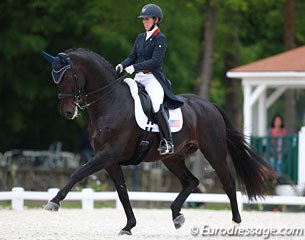 Team USA were deemed winners of the third leg of the FEI Nations Cup Dressage 2016 series at CDI5* Compiegne (FRA) where torrential rain led to the cancellation of today’s Grand Prix Special. An extraordinarily heavy downpour left the arenas under water for some time, and the Ground Jury made the decision to base the result on yesterday’s Grand Prix alone, in which American riders came out on top by a convincing 11-percent margin.

“Unfortunately, these changes have to be made due to the bad weather circumstances, with the approval of the FEI, the Organizing Committee, the President of the Grand Jury, the Foreign Judge, the President of the Appeal Committee, and the Chefs d’Equipe” the Organising Committee explained in a press release. Riders were given the option of competing in today’s Freestyle as a separate class.

The American side also won out at the opening leg on home ground in Wellington, Florida (USA) last month, so now hold a significant lead on the FEI Nations Cup™ Dressage 2016 leaderboard.

Compiegne was chosen as the first of three Olympic selection competitions in Europe for American riders, and they really rose to the challenge when dominating the individual rankings in yesterday’s Grand Prix in which Kasey Perry-Glass came out on top. Riding Goerklintgaards Dublet, the 28-year-old rider posted the individual winning score of 77.440 to confirm the potential that has been evident through her increasingly impressive performances with the 13-year-old Danish gelding over the winter months. 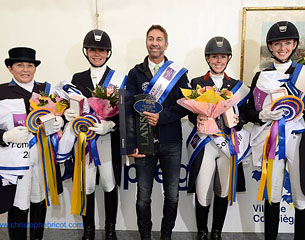 And her winning ride was backed up by second place individually for Laura Graves and Verdades, the pair who created a major sensation when finishing fifth at the World Equestrian Games™ 2014 in Normandy (FRA). When Graves’ mark of 75.440 was reinforced by 73.920 from Allison Brock and Rosevelt, then Shelly Francis’ 71.120 with Doktor was the discard and the US winning total was 226.800.

Runner-up spot went to Sweden on a team tally of 215.040, bolstered by a fifth-place individual finish for double-Olympian Patrik Kittel partnering Deja, the horse with whom he won both the Grand Prix and Freestyle at CDI4* Hagen (GER) last month and at CDI5* Doha (QAT) in March. His mark of 74.640 was added to the 70.340 earned by Mads Hendeliowitz and Jimmie Choo Seq and the 70.050 awarded to Emilie Nyrerod and Miata, while Jennie Larsson’s 70.020 with Zircoon Spring Flower was the discard mark as Team Sweden posted a final scoreline of 215.040. The host nation’s Karen Tebar finished fourth individually after a charming test with Don Luis that put 75.060 on the scoreboard. This ensured third place for her team, as Ludovic Henry (7th indiviually) posted 71.440 with After You and Pierre Volla (Badinda Altena) posted 67.160 to leave Stephanie Brieussel’s 66.060 with Amorak as the team discount. Just 1.38 percentage points separated the French, whose final tally was 213.660, from the Swedes, while Germany lined up fourth ahead of Belgium in fifth, Great Britain in sixth, Netherlands in seventh and Switzerland in eighth and last place. 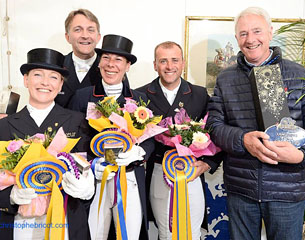 FEI Nations Cup™ Dressage 2016 now moves on to Rotterdam (NED) next month, but with the announcement last Friday of the cancellation of CDIO3*/CDI2* Hickstead (GBR) at the end of July, the series has been reduced to six legs. Dane Rawlins, Dressage at Hickstead Director and founder, announced the decision to cancel “due to a lack of funding to make the fixture viable.” In a press release he explained that “Hickstead has been working with British Dressage to explore ways to secure additional sources of revenue for the show but, despite best endeavours by all, the fixture will not run at the West Sussex venue this year….I want to stress that it’s only a year off and the intention is that the international will return in 2017.”

Falsterbo in Sweden will host the fifth leg of series from 7 to 10 July, and following the cancellation of Hickstead, the last leg will now take place at Aachen (GER) from 13-17 July.