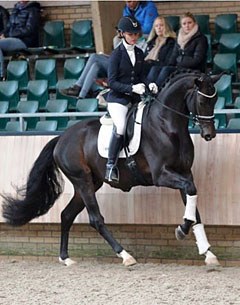 The dark bay Westfalian bred Daily Diamond scored 87.5 points and became the high scorer of this 50-day testing. Seven stallions in total out of a group of eleven that began the testing scored sufficiently and were accepted for KWPN breeding.

Wim Ernes, outgoing chair of the licensing committee, was pleased with the quality of the group. "We were able to approve seven interesting stallions of which two are extra interesting because of their bloodline. Bloodlines and quality came together beautifully," said Ernes.

Daily Diamond is owned by A. Vellekoop and Nico Witte. He scored 9s for trot, suppleness, self carriage, rideability and temperament.

Habanna (by Vivaldo x Van Gogh), the first licensed son by Grand Prix stallion Vivaldo, finished third with 85.5 points. He got 7 for walk, 8.5 for trot and 9.5 for canter. Edward Gal's German bred Trafalgar (by Totilas x Lord Loxley) finished with 82 points. He scored 8s for his basic gaits, rideability and potential.