The End of an Era: Totilas Retired from Sport 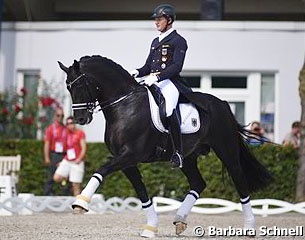 The news has been officially published today and it heralds the end of an era. Totilas, the world record breaker that lifted dressage and dressage judging to a new level in 2009, has been retired from competition sport.

The 15-year old Dutch warmblood stallion Totilas (by Gribaldi x Glendale) was co-owned by Ann Kathrin Linsenhoff and Paul Schockemohle. Linsenhoff owned the sports rights and gave the ride on the stallion to her step son Matthias Rath, Paul Schockemohle owns the breeding rights and has briefly stood Totilas up for stud for a stud fee of 8,000 euro.

Since Totilas moved to Germany in the winter of 2010 he has represented the country only once in all three rounds: at the 2011 European Championships in Rotterdam, where he finished with team silver and fifth individually. 2011 turned out to be the duo's most successful competition year in their career. They also won the national title in Balve.

As of 2012 Rath made the highly controversial switch from the German training system to notorious Dutch trainer Sjef Janssen, who is known for the LDR training method through which his life partner Anky van Grunsven became one of the most successful dressage riders in the world.

Unfortunately after winning the 2012 CDIO Aachen, Totilas got injured and missed out on the Olympic Games. It took him two years to recover from injury and Rath made his comeback in May 2014. He won the CDI Kapellen and Wiesbaden and two rounds at the CDIO Aachen before withdrawing for the freestyle because of another injury. In 2015 Totilas did one test show at a local event in Hulten, The Netherlands, before heading to the CDIO Hagen in July, where he was immediately selected on the German team for the 2015 European Championships in Aachen. 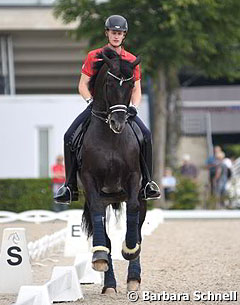 Aachen became a debacle as neither rider Rath, nor trainer Sjef Janssen nor the entire German technical staff refrained from sending an injured Totilas into the show ring for the Grand Prix. The ride received many whistles, from detractors who spotted the horse lame in the trot extensions and half passes, and from fans who disagreed with the low score the judges gave the pair. As clear favourites for team gold, Germany finished in a "disappointing" bronze medal position.

One day after the team test at the 2015 Europeans Totilas was withdrawn from further competition and transported to an equine clinic in Belgium, where he was diagonised with periostitis of the coronet band on the left hind hoof.

Today, Tuesday 18 August 2015, the Linsenhoff family and Paul Schockemohle communicated through the German Equestrian Federation that the horse would be retired from competition sport. They issued the following statement:

"As has already become known through many sources, Totilas was diagnosed with periostitis last weekend. Because of this new injury we have mutually decided to retire him from active competition sport. Totilas will not return to competition sport in the future."

"This decision was a very difficult one for the family, but we believe this step is careful and right. Unfortunately the sport career of Matthias Rath and Totilas was never set under a good constellation from the start," said Dennis Peiler, the managing director of the German Equestrian Federation.