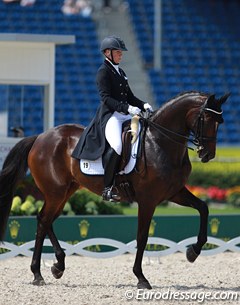 Finnish Grand Prix team rider Emma Kanerva has resigned from her position as bereiter at Hubertus Schmidt's yard in Paderborn, Germany, and is relocating to Emile faurie's Heath Farm in Great Britain.

Kanerva has been working at Hubertus Schmidt's Fleyenhof for the past 10 years. The 30-year old rider has now decided to go independent. She will be training her horses with Finnish team trainer Emile Faurie in the U.K.. Kanerva will leave Fleyenhof on 1 November 2015.

Hubertus Schmidt cited that Kanerva left for personal reasons. "We have a much closer relationship with Emma than a purely professional one," Schmidt explained. "It's more friendship. We are truly sad that Emma will be leaving us, but we understand that she wants to take this step."

Kanerva competed at the 2012 Olympic Games in London with Spirit and is representing Finland at the 2015 European Championships in Aachen this week with Solina.