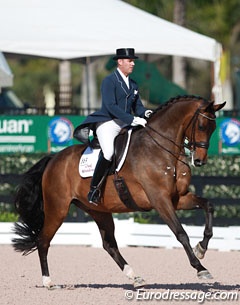 American Grand Prix rider Christopher Hickey has resigned as head trainer at Betsy Juliano's Havensafe Farm and will go independent. Hickey resigned at the beginning of March and will leave his post at Havensafe mid April.

From Hilltop Farm Hickey went straight to work for Juliano at Havensafe for one year, taking over from George Williams who resigned as head trainer in March 2014.

Hickey will have his independent business at Cecelia Stewart's Oakmeadows Farm in Edgemoor, S.C. and Wellington, FL. He already rides the small tour horse Ronaldo (by Romanov) for Stewart and she recently acquired the 5-year old Danish warmblood Zackonik (by Zack x Romanov) for Chris to ride.