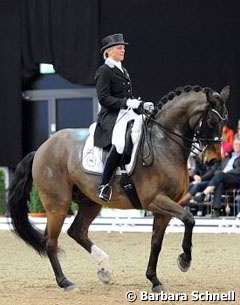 Uta Gräf and her second Grand Prix horse Dandelion rose to the top of the ranking at the national indoor competition in Munster, Germany, on 24 - 26 January 2014. The K+K Cup in Munster is annually well attended by German based international dressage riders who test their new horses in the Grand Prix at this national event.

Uta Gräf and Michael Lindsten's 12-year old Oldenburger bred Dandelion (by De Niro x Figaro) were on excellent form and posted a winning score of 72.660% in the Grand Prix, heading a field of 22 competitors. Gräf went on to win the Grand Prix Special with a whopping 76.020 % and edging out routinier Nadine Capellmann on Girasol.

"We're actually a bit speechless about that wonderful last Sunday," Gräf explained. "Dandelion was able to improve on his form in the Special and really felt like he was having fun presenting himself to the public. It shows that mentally he's always getting stronger. I was really blown out of my socks from that 76% in the Special."

Gräf also took along her third Grand Prix horse Lawrence, a 10-year old Westfalian gelding by Laomedon x Fidermark owned by Annette Göbelsmann-Schweitzer. The pair was sixth in the Short Grand Prix (67.674%) and second in the Kur to Music (72.900%).

"It was Lawrence's first kur to music," said Graf. "Unbelievable but true but at his debut he was able to finish second. Both lads now get a few days rest at home and will go into the field." 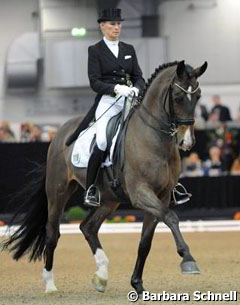 Brigitte Wittig loaded her lorry with three chaps and with the most experienced one of the pack, the 11-year old Westfalian bred Balmoral W (by Breitling W x Diego xx), she finished second in the Grand Prix with 71.600% and third in the Special (73.059%). At small tour level, Wittig saddled the 8-year old Oldenburg branded Bodega W (by Breitling x Fabriano) to finish second in the Developing PSG Horse class with 72.632% and with the 8-year old Hanoverian bred Bolghieri (by Breitling x Donnerhall) she finished 12th on 68.114%. Bolghieri is owned by Mexican O-judge Maribel Alonso.

Nadine Capellmann and her experienced 13-year old mare Girasol (by Gribaldi x Landioso) were third in the Grand Prix with 70.440% and climbed the ladder to finish second in the Special with 76.020%. "The indoor arena is quite noisy and in the Grand Prix she spooked twice," Capellmann explained about her Grand Prix test. "Still, each time she was quiet again quickly and let ride a top performance out of her." 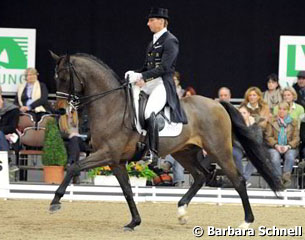 The Grand Prix Kur to music was won by a brand new combination, Swedish Patrik Kittel on Pernille Andre-Hokfelt's former ride Wladimir OA (by Flemmingh x Florestan). The pair was 14th in the Grand Prix (66.140%) and won the kur with 75.025%.

"Wladimir went above and beyond and produced a super test," Kittel said after winning the kur. "Wladde was in top form, and so was his rider after a little brain sleep yesterday and from start to finish showed the work we all knew he was capable of. Full of expression, positivity and quality, Wlada finished with 75% and we all cheered as he really deserved the win after his perfomance."