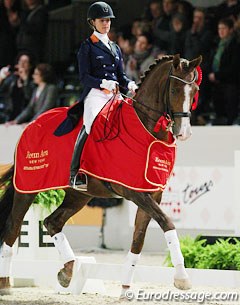 Cornelissen and her partner Sjaak van der Lei acquired the liver chestnut gelding begin 2012 as Adelinde's 2016 Olympic hopeful. The horse was originally named Molenkoning's Travers and Adelinde discovered the chestnut at her own stable when rider Kirsten Brouwer came to train him with her.

As soon as Adelinde heard that Travers was for sale, she acquired the horse.  She renamed Travers into Galahad, another knight of King Arthur's Round Table like Parzival. At the beginning Adelinde used to take the horse to competitions for schooling sessions and as prize-giving horse but he hasn't been seen at shows for a while.

Last week Cornelissen also had to say goodbye to her small tour horse Tiara (by Jazz) which returned to owner Ruud van Nobelen as a broodmare. The world number one dressage rider still has two more small tour horses at her disposal: Ulissa and Zephyr.