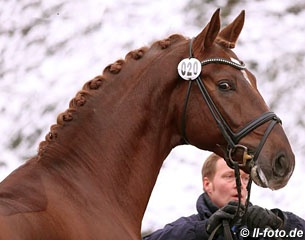 Eighteen dressage colts out of a collection of thirt-five have been selected to participate in the 2013 Oldenburg Spring Under Saddle Licensing which will take place on 4-5 April 2013.

The stallion licensing committee picked 18 dressage stallions at the pre-selection days held in Vechta, Germany, on 17-18 January 2013. The stallions were presented in freedom, on the lunge line and in hand on hard surface.

At the under saddle licensing the colts will have to pass two phases: a 1-day performance test which includes free jumping, presentation of the gaits under saddle and a rideability test by a guest judge rider, and a traditional assessment on hard-surface, in the triangle arena and walk in-hand.

Colts allowed to appear at the spring under-saddle licensing are 3-year old colts which have never appeared at a licensing before and 4-year olds which haven't been assessed yet but have completed a 30- or 70-day stallion performance testing. 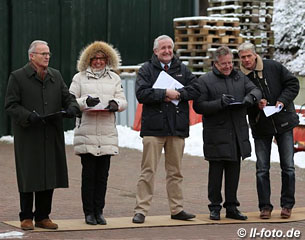 The best represented sire with the most offspring through to the under saddle licensing is the Westfalian stallion Belissimo M (by Beltain x Romadour II). Three of his offspring were picked and two of those are owned by Heinz Ahlers. Sir Donnerhall I has two offsprings through.

The Dutch bred Vivaldi x Ferro x Lancer II was initially accepted for the 2012 Main Oldenburg Stallion Licensing but didn't make. He will give a second try under saddle. One Ampere out of a Donnerhall x Rubinstein I mare will also return for the licensing.

The selected colts are listed here.