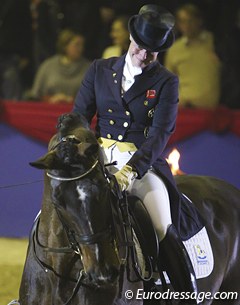 During the 2012 Oldenburg Althengst Parade at the annual Oldenburg Stallion Licensing, Hindle presented Diamond Hit in a special retirement ceremony and was visibly moved by emotions. The 25-year old dam of Diamond Hit, Loretta, made a guest appearance and was presented in hand at the parade.

Diamond Hit began his career as a premium stallion in 1999. He was reserve Bundeschampion in 2002 under Miriam Henschke and became reserve Young Horse World Champion twice.  Emma Hindle acquired the dark bay stallion in 2002 and trained him to Grand Prix level. In 2005 he received the VTV Dressage Stallion of the Year Award.