The Effect of the Pessoa Training Aid on Temporal, Linear and Angular Variables of the Working Trot 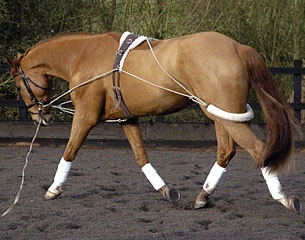 Researchers Vicki Walker, Sue Dyson and Rachel Murray of the Animal Health Trust in Newmarket studied the effect of the Pessoa Training Aid on temporal, linear and angular variables of the working trot.

The Pessoa Training Aid (PTA) is commonly used for training and rehabilitation, yet there has been little research into its mechanism of action. The aim of the study was to evaluate the effect of a PTA on stride characteristics of forelimbs and hindlimbs at working trot.

Twelve riding horses were lunged on a 16m diameter circle without a PTA and with a PTA within an arena set up that ensured subjects were perpendicular to the camera for motion capture. The PTA was positioned with the line to the bit attached at level of the shoulder and length set with the horse’s nose in line with the vertical when stationary. Stride duration, speed and stride length were determined using inertial motion sensors and a Global Positioning System. Duty factor, tarsal angle, fore/hindlimb fetlock extension, lumbosacral flexion angle at forelimb/hindlimb stance and maximal hindlimb retraction and protraction were derived from high-speed motion capture (125Hz).

Decrease in speed and stride length with the PTA compared with without, and maintenance of stride duration, and observation of the horses’ outlines suggest that they are in better balance.

Lack of change in forelimb and hindlimb fetlock extension and tarsal flexion suggest that peak loading of the limbs does not alter with the PTA. Decreased lumbosacral flexion angle at maximal hindlimb retraction may be a response to hindquarter band tension, suggesting stimulation of the core muscles at this phase of the stride.

It appears that the PTA may be beneficial for rehabilitation of horses recovering from limb injuries, because it encourages lumbosacral flexion without concurrent increase in loading of limb structures. A detailed investigation of trunk kinematics is warranted to further understand influence of the PTA on posture.

The Pessoa Training Aid appears to improve posture and stimulate the core muscles of the horse without producing greater loading of the limbs. This may make it a useful rehabilitation tool for horses recovering from limb injuries.