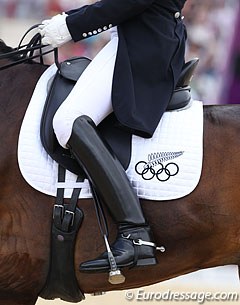 Researchers M. Wulf, G. Racic, R. Stodulke, M. Becker-Burck of the Graf-Lehndorff-Institute for Equine Science in Neustadt (GER) and C. Aurich of the University of Veterinary Sciences in Vienna, Austria, conducted research into the influences of a saddlepad on heart rate, heart rate variability and thermography of ridden horses.

Six warmblood horses (three stallions, two geldings, one mare, between three and seven years old) were used to evaluate the suitability of a saddlepad (Trapezius Relieve Pad, TRP, Passier, Hanover, Germany). The pad provides a specific cut-out sector for decreasing the compressive stress of the trapezius muscle. Heart rate and heart rate variability (Polar, Kempele, Finland) were determined. A thermal imaging camera (Wuhan Guide Infrared, China) was used to evaluate temperature distribution on the bottom of the saddles and the horse’s back. Pressure under saddle was measured using a pressure pad (Savecomp Megascan GmbH, Hanover, Germany).

The horses were ridden on two consecutive days in a cross over study design with pad (WP) and without pad (WoP) at random order over a period of 15 minutes in all three gaits (tempi controlled) on both hands before measuring the skin temperature with the thermal imaging camera. The RR interval was recorded from the time of saddling until two hours after riding and analysed in 5min- intervals. Irrespective of gaits, RR interval was higher with than without TRP (walk WOP 614±47, WP 737±50; trot WoP 515±25, WP 528±26; canter WOP 560±22, WP 681±48 msec; p<0.001 between gaits, p<0.05 between groups) demonstrating a relaxation of the horses while being ridden with the TRP.

Thus changes in weight distribution of the rider using the TRP are suggested. The TRP seems to lead to a better heat flow under saddle and a reduction of pressure in the caudal region of the saddle and thus contributes to relaxation in the horse despite an increase in maximal pressure under saddle.

Usage of a specially designed saddle pad leads to a pressure reduction in the hind quadrants of the saddle and a higher RR interval showing relaxation of the horse. This pad can therefore help improving the welfare of ridden horses.