Connery, Trakehner Stallion of the Year 2012 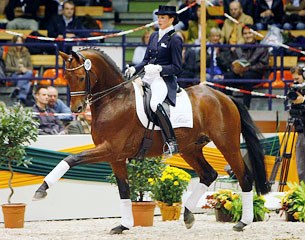 The 14-year old Connery was already proclaimed elite sire and can now add Stallion of the Year to his list of achievements.

Bred by Manuela and Gisela Harder in Hamburg, Connery was named by the late Katrin Poll of Gestut Hörem who had bought the young stallion as a foal. He is by Buddenbrock out of Caro Dame II (by Karo As).

Licensed in 2000, Connery  did his 30-day performance test and qualified for the Bundeschampionate. As a youngster he was ridden by Katrin Poll and Anna Sophie Fiebelkorn.

His most famous offspring is the Bundeschampion and reserve world champion Imperio, now ridden and partly owner by Hubertus Schmidt, as well as world eventing young horse champion Charlie Weld.