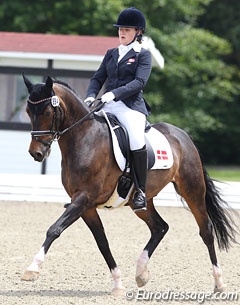 "We are very excited to have acquired SL Lucci," Phoebe's mom Tracy told Eurodressage. "At the trial he was impeccably behaved both on the ground and under saddle. Phoebe is a lot smaller than Caroline and yet he responded positively to her riding. Phoebe really enjoyed riding him and knew instantly that he was the pony for her.  He has three lovely paces and rides much more like a horse compared to Hillmen so is the perfect next step for Phoebe." 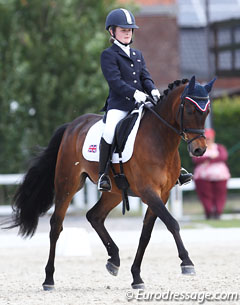 The 12-year old Phoebe Peters made her international debut at FEI pony level in 2011 with Hillmen. She is coached by British pony team trainer Peter Storr.

Her short term forus is to contest the Premier Leagues in Great Britain with Lucci alongside Hillmen working towards International selection.

"We are very hopeful that Phoebe and Lucci will make a good team and have a successful partnership together," Peters added. "Phoebe is lucky to have three full years in ponies after this year. Because she is still only 12 we have time to let the partnership grow under the guidance of Phoebe's trainer Peter Storr and are very optimistic about their future together."

Phoebe's ultimate aim is to represent Great Britain at a European Pony Championships.