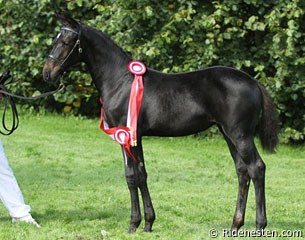 JJ Fuji and Ellely's Tornado have been named 2011 Danish Dressage Foal Champions at the 2011 Danish Warmblood Elite Mare Show which is held in Vilhelmsborg, Denmark, 9 - 11 September 2011.

JJ Fuji (by Fürstenball x Deemster) was the undisputed champion in the dressage filly division. Bred and owned by the Norwegian based company JJ Horses, Fuji qualified for the Championships at a foal show in Norway and travelled to Denmark for the Finals.

"This beautiful and very expressive filly displayed a great activity in the hind-legs and ability
to sit. The great grand dam is a former Grand Prix jumper," said the Danish Warmblood society. 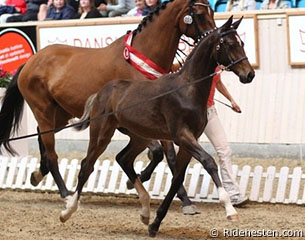 Ellely's Tornado (by Tailormade Temptation x Flemmingh) was proclaimed champion in the dressage colt division. He is bred and owned by Birgith Thomasen.  Ellely’s Tornado scored no less than a 10 for his trot and the judges
evaluated the potential of his gaits as almost unlimited.