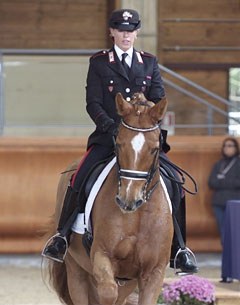 The Italian Championship coincided with the 2009 CDI La Mandria and the Italian riders had to compete in the international classes. Their points were tabulated in special Italian Championship rankings. In Italy a set of medals are distributed for the two technical tests combined and one for the Kur to Music.

At Grand Prix level, the Milan based former young rider Valentina Truppa and her Danish warmblood Chablis (by Castro x Leonardo II) won two gold medals for achieving the highest Italian scores in the Intermediaire II (68,684%), the Grand Prix (66,170%) and Kur to Music (72,200%). Riding to a freestyle designed by Claudio Gabbiani, Truppa showed nice trot half passes but the piaffe could have been more expressive and mistakes in the one tempi's meddled with the harmonious picture.

The silver medal both in the technical and freestyle category went to European Championship Italian team rider Anna Paprocka-Campanella on the 12-year old Dutch warmblood stallion Prego (by Zazou x Ulft). She scored 65,211% in the Inter 2, 63,872% in the Grand Prix and recovered to a 69,850% in the Kur to Music. The bronze went to Roberto Brenna on Macho in the technical division (Inter 2, Grand Prix) and to Monica Iema on Ramanaz for her third place in the freestyle.

Aboard the 14-year old Hanoverian mare What's Up (by Wittinger) junior rider Chiara Biliotti, who is trained by Riccardo Carapia, earned the gold medal in her division by winning the team championship test (64,108%), individual test ( 65,053%), and kur to music (69,150%). Carapia's other student Charlotte Lindsten got silver twice with her rides on Escobar. The bronze went to Eugenia Guarda Nardini and Woland, who regularly train with Holga Finken.

At FEI pony level, Carlotta Marconi proved her worth with Ferdi's Folklore Puccini (by Folklore x Silvertop's Rondo). The Rome based 14-year old rider won all rounds with her dark bay pony gelding. Alice Redaelli, who is trained by Norma Paoli, steered her pony Don Juan finished to a silver medal. Leonardo Tiozzo and Dorian Gray scored the bronze.

Some serious judging discrepancies were to be seen at the Italian Championships. Especially Italian judge Massimo Buzzi simply did not have a fly in his eye, but probably a whole bird cluttering his view. He was off the scale on many rides, most strikingly on the one of German Hendrik Lochthowe on Rubin Cortes in the Intermediaire I. Lochthowe was the winner of the class scoring between 71,5 - 74,5% with the foreign judges and a jawdropping 10% (!!!!) lower on 64,2% with Buzzi. At Grand Prix level Buzzi was quite off the scale with his 75.000% score for Valentina Truppa in comparison to Beutler-Bath's 69.250%. Even at junior rider's level Buzzi's scores were peculiar. Chiara Biliotti won the junior team test with 64,108% scoring 67,027% with Evi Eisenhardt and 60,811% with Buzzi. This judge, who is the chef of Italian judges and responsible for their training, seemed not to have set a good example. He caused much frustration and disappointed with many riders and trainers at La Mandria.