DelGiorno Dances Her Way to a Freestyle Gold at 2009 NAJRC 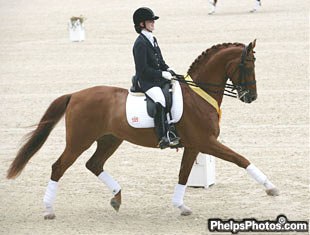 The top 15 Juniors came back to perform their choreographed routines in the Championships and the crowds cheered them on under sunny Kentucky skies.

After the scores were tallied Nicole DelGiorno and Lamborghini Dane continued their winning ways and were named the freestyle Gold medalists. The pair wowed the judges with their well-choreographed test to the music of “Pirates of the Caribbean” to earn a total score of 68.550%. Even after performing two other stunning tests this week, Lamborghini performed a fluid and expressive test for DelGiorno.

“I had a good test today,” DelGiorno said. “It started off a little shaky. I turned into the arena, and he kind of flew to the left. It started out crazy, kind of like a rodeo, but then it got better. I think that actually helped him relieve some of his energy, and that was really good for the rest of the test.”

The freestyle Gold is the third medal and second Gold for DelGiorno and Lamborghini this week; they earned the Individual Gold medal, as well as the Team Bronze medal. Their score in the freestyle was the highest Junior score of the competition.

Finally, Heather Ots and Varekai made their first medal appearance this week. They were awarded the Bronze medal with a score of 68.000%. This was the best showing for Ots and Varekai this week by more than five points.

Individual Silver medalists Lauren Knopp and Rho Dance had a few bobbles in their test and received a score of 60.050%. The scores in the freestyle were very close throughout with less than a point-and-a-half separating first from 10th place.