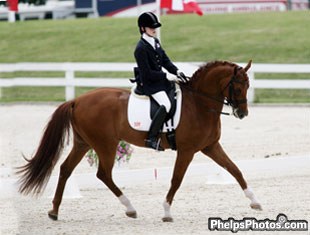 The Junior dressage riders were back in the arena on Saturday morning July 25 for the Individual medal tests at the 2009 North American Junior Riders Championships.

Some gusty wind and impending storms made for some excitable horses, but the riders rose to the challenge and produced some lovely tests for the judges during the NAJRC . In the end, less than one whole point separated first place from third.

Nicole DelGiorno and Lamborghini Dane turned in the best test of the day to take home the Individual Gold medal. The pair received a 66.316% from the judges. While other horses were bothered by the weather, Lamborghini gave DelGiorno a great ride.

“My ride today was great,” she said after her test. “The wind actually worked in my favor. The more stuff going on the better for my horse. He’s ‘been there, done that,’ and he’ll go in the ring and do the test, but with everything flapping round, he’s a little more flashy. He was really having fun…I could tell. It felt like he was dancing.”

DelGiorno has only been riding Lamborghini for about four months. Despite that, she has formed a strong bond with the Danish Warmblood gelding.

“He’s really smart,” she said. “He’s a character. There’s no mistaking what he wants. He sits like a dog and stretches like a cat. I don’t think I’ve ever been on a horse that genuinely likes to go show as much as he does.”

Taking home the Individual Silver medal was Lauren Knopp and Rho Dance. They finished right on Lamborghini’s heels with a score of 65.842%. While the blustery weather helped DelGiorno turn in a flashy test, it disrupted some of Knopp’s concentration and was cause for a few little bobbles throughout the test.

“The arena was scarier today because of the wind and everything kept falling down,” she said. “He was a little hot today, so that made it a little harder to ride. I messed up on the changes a little; he spooked before I asked him to change. It could have been better, but overall I was pleased.”

Knopp will perform her freestyle test tomorrow thanks to her qualifying score. She has only ridden a freestyle once before, but is looking forward to the chance to start riding in them more often in the future.

“The freestyle music leaves a lot to be desired, but hopefully next year we can make a better one!” she laughed.

Finally, finishing in the Bronze-medal position was Megan Lane aboard her mare, Caravella, with a score of 65.842%. The weather also had an effect on Lane’s ride, but she tried to turn it around into positive energy.

“[The test] was a little tense today,” she said. “The weather was a huge factor, but she really held it together considering the circumstances. I tried to use the weather to my advantage. I tried to focus the extra energy on making more expression.”

This is Lane’s last year in the Juniors because she is 17 years old, but she is already looking forward to the future.

“I want to try to do Young Riders next year. Maybe when I’m 21 we can do the Young Rider grand prix.”

The qualifying Juniors will perform their musical freestyles tomorrow before receiving their medals in the closing ceremonies.