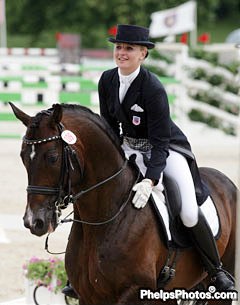 The Young Riders in the dressage competition returned to the arena for the final time to perform their musical freestyles.

The stadium was rocking as the 15 qualifying riders performed their choreographed routines for an exuberant audience during the North American Young Rider Dressage Championships at the Kentucky Horse Park.

The highest score thus far in the competition came in this freestyle round and was awarded to Kassandra Barteau and her imposing partner, GP Raymeister. The pair received an impressive 73.000% to catapult her into the top position, more than three points ahead of her nearest competitor. Barteau and “Ray” performed nearly faultlessly to music from “The Man From Snowy River.”

“I was very overwhelmingly happy,” Barteau said. “My horse finally calmed down and relaxed. Even though it was windy and things were blowing around, he was really focused on me. This was the best he’s felt all weekend. He was totally with me. That was the best Young Riders’ test I’ve ever done. It felt really great.”

Barteau’s mother, Yvonne, choreographed her freestyle and did her music for the test. Barteau has lots of experience with riding to music as both her mother and her husband, Kim, have been performing to music for years.

This is Barteau’s last year of eligibility to compete at the NAJYRC. In the future, Barteau hopes to continue competing with Ray and her other mounts, and she would like to continue on the path to high performance international competition.

The class winner from the Team test placed second with a score of 69.600%. Brian Hafner and Lombardo LHF put in a smooth and solid test and impressed the judges to receive the pair’s highest score of their competition.

Kristen Becker and Ramses, who have placed consistently in the top three throughout the course of this competition, received a 69.600% for their freestyle, which put them in third place. Ramses’ expressive paces earned him his highest score over the course of the NAJYRC.

“He was definitely tired, but the wind didn’t phase him at all,” Becker said. “He’s been great all week.”

Becker tailored her freestyle to fit how Ramses’ was feeling, and her choice was rewarded with a great final score.

“There are a couple different ways I can ride it, depending on how he feels,” she said. “I try to highlight his strong points. I try to challenge both him and me out there. I don’t want it to be easy. I want to have fun and be challenged.”

Becker has the option of competing at Young Riders for one more year. She would like to compete at the Brentina Cup if her horse is ready for it. If not, she will progress with him so she does not push him too hard.

The Individual Gold medalists Mary-Cameron Rollins and Rose Noir 2 had a few minor bobbles in their freestyle and placed sixth in the class.

The freestyle is the last test for the Young Riders, and the top 15 Juniors will take to the arena in the morning to perform their final tests. All of the dressage medals will be awarded at the Closing Ceremonies taking place tomorrow at 3:30 pm.