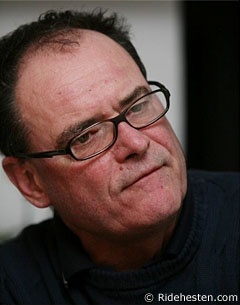 Since the Olympic Games in Hong Kong there has been a dialogue between the dressage committee and the Executive Board of the FEI with Princess Haya as the President. This dialog has been open for everybody interested and ends up with a request

from the President asking for the resignation of the Dressage Committee. The Dressage Committee finds no reason to resign and this leads to the situation that the Executive Board does not see any possibility to continue the work with the present dressage committee with the intention to promote the dressage sport.

Helgstrand especially commented that he is "looking forward to the General Assebley in Argentina, and I am convinced the this is going to be a great issue especially of principal interest concerning responsibillity and competences."

Mariette Withages, Chair of the FEI Dressage Committee, talked to DressageDaily at the Del Mar Classic where she has a part of the FEI Ground Jury. Her comments were as follows:

“Everything has already been said in the letters that were already published. There is no need for additional discussion at this time. It is a General Assembly issue, and there are rules and protocols to follow.”