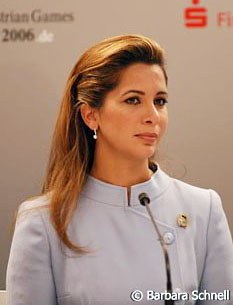 Princess Haya's request for immediate resignation of the FEI Dressage Committee seems to have created a war of the worlds, in the dressage world that is. For the first time, some national equestrian federation have given some opposition against Haya's letter.

The German Equestrian Federation (FN) has openly stated that it cannot understand Haya's decision to order the FEI Executive Board to fire the FEI Dressage Committee.

The German Equestrian Federation agrees with the great concern the Belgian Equestrian Federation expressed in an open letter sent to all equestrian federations in Europe and to the FEI. The letter criticizes the inappropriate way the FEI Executive Board has dealt with the Dressage Committee. The letter raises questions such as: "Have the members of the Dressage Committee received the opportunity to defend themselves? If so, how? Has the FEI bureau given special permission to the FEI Executive Board according to the FEI rule 4.5.1? Doesn't this drastic decision by the FEI Executive Board undermine the competence of the FEI Bureau and the power of the FEI General Assembly? 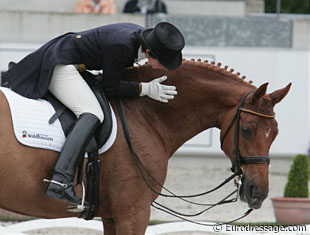 Spanish chef d'equipe Bobby Fernández De Bobadilla was interviewed by the Spanish magazine Ecuestre Online and says she's not thinking of resigning at all. "'I don't know why I must resign, I don't think the Committee had done anything bad," Bobby explained. The FEI Dressage Committee is selected by the FEI General Assembly and its mandate coincides with that of the FEI President. This means that its mandate only finishes when the President's mandate finishes. Haya must present a statutory modification to the General Assembly if she wants to dismiss the Dressage Committee. "Nobody can skip the rules, if the President does it I think is something grave. I won't resign because the President says so. It doesn't matter if she's wrong or not."

The Dutch Equestrian Federation (KNHS) act like Pontius Pilatus in the matter on the one hand and defends Haya's decision on the other. The KNHS believes that the FEI has to solve this matter internally, and because the KNHS does not have all relevant information, it does not want to express on opinion on the content of Haya's letter. However, the letters which the KNHS sent to the FEI are used as arguments in this case. To the KNHS, this highlights that the Dutch federation and FEI share the same opinion concerning executive policies.

Though not clear from their official statement, the Dutch Equestrian Federation has been the one which most heavily challenged the policies of the FEI Dressage Committee. They wrote several complaints to the FEI about decisions the Dressage Committee took. 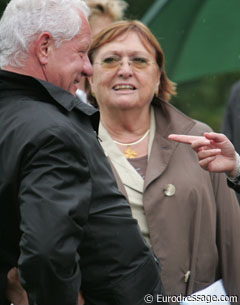 The frustration of some Dutch dressage people with the FEI Dressage Committee members came into a major slipstream one month ago when three judges, Mariette Withages, Ghislain Fouarge and Gotthilf Riexinger, gave an interview to the Dutch magazine De Hoefslag in which they expressed their dissatisfaction with the arrogant and threatening behaviour of the Dutch chef d'equipe Sjef Janssen at the Olympic Games. Withages points out that the stepping stone of the whole debate concerns two letters written by KNHS High Performance Director George de Jong criticizing Riexinger as head of the Olympic judging panel, Barnabas as a weak judge and Furuoka as a judge self appointed as she's member of the Dressage Committee. According to Withages, the Olympic judges were appointed at the time when Sjef Janssen himself was still a member of the Dressage Committee.

Furthermore, judge Riexinger points at Jacob Melissen, the press agent for the Dutch Equestrian Federation, who has insulted him in a press conference calling him a "chauvinist" and a "patriot." This latter incident was resolved at the CDIO Aachen and apologies were accepted. In the same Hoefslag article judge Ghislain Fouarge expressed his disappointment. "Although there was no criticism on me personally, I'm sick to my stomach of all this. It's new to me that judges have been named outlaws in the press. We are vulnerable as everyone can see what we do. I have the impression that a trainer has fueled everything and put unnecessary pressure on the matter so that everything escalated. Yes I'm talking about Sjef Janssen and I have to confess this hurts me. [...] I like Sjef and am fond of him. I know him as a very emotional faint-hearted man, but he's regretfully becoming more extreme, he is crossing boundaries, and gets carte blanche from the KNHS to do so. What Sjef does is counterproductive. He wants to conduct war and influence the judging with that to achieve his goal. [...]] we are treated without respect. A judge sits in his box out of love to the sport and for his profession. We don't make money with it. Hong Kong only costs us money. Is a little respect too much to ask?" 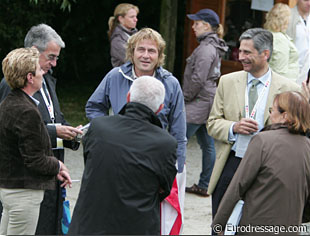 The secret meeting which Technical Delegate Mariette Withages planned in Hong Kong to release some pressure of the judges, caused much disturbance in the dressage world even after the Olympics. This meeting was not only against FEI rules, but it also did not include all members (riders/chef d'equipes) at the Dressage Olympics. "The meeting was to take away the unhealthy pressure which was on the judges," Withages said in the article. Riexinger said that the meeting was not a good idea and Fouarge agreed. "The meeting might not have been the right decision, but it did bring some relief in the situation. The FEI later decided against such meetings and they will never take place in the future," Withages added.

In the same Hoefslag issue Janssen was able to reply to the article. He refers to the letter of George de Jong in which a new judges panel for Hong Kong was requested. According to Janssen, "Withages did nothing with the letter. Princess Haya and a few members of the FEI Executive Board tried to get a new panel a few months before the Olympics but without result. Withages and her members refused and held on to rules and procedures without thinking about the purity of the sport." Janssen refuted that he willingly accepted the Olympic panel when he was still in the Dressage Committee. "I have protested heavily against it.[...] There was an email that I officially protested, but that was all." Janssen admits that after the Grand Prix in Hong Kong he went to Withages to complain about Riexinger's judging but says he did not pressure the German judge. Janssen also denies that he has no respect for the judges. "I'm the last to have no respect for professionals who execute their work meticulously. On the contrary, I try to learn from these people. [...] I can not deny there were some hard feelings. They could have prevented it if they have made some changes beforehand." 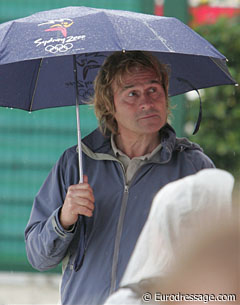 In response to the judges' article, Janssen decided to sue all three judges. His lawyer Luc Schelstraete is demanding that Janssen's partner Anky van Grunsven is never to be judged by the triumvirate again as Janssen believes a conflict of interest has been caused by this and that Anky can no longer be judged without bias. He also plans to sue for damages. Withages, Fouarge and Riexinger and their individual lawyers had to go the FEI bureau in Lausanne on Tuesday October 08, for a hearing. The outcome is not known yet.

Though the "three judges vs Janssen" case is a huge item in the Dutch press, for the world wide dressage sport it just appears as Janssen's personal vendetta and has little do with Princess Haya's request for immediate resignation of the FEI Dressage Committee. Haya's request is based on facts which took place almost two years ago until recently and her appeal only includes the secret meeting in Hong Kong which was also brought to the fore in the Hoefslag article.