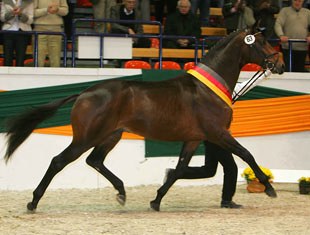 Grand Passion was proclaimed champion of the 2007 Trakehner Stallion Licensing in Neumunster, Germany, on October 27, 2007. Thirteen stallions in total were licensed of which seven were honoured with the premium status.

"Grand Passion is a stallion with the conformation of a foundation sire. He encorporates that special thing and has everything to be a licensing champion," Lars Gehrmann said.

Grand Passion is by Oliver Twist out of State Premium mare Gipsy Rose (by Polarion). He is bred by Gestut Heinen-Bönninghardt from Issum, Germany, and sold at the licensing auction for the record price of 300,000 euro to Tony Pidgley of Kilbees Stud Farm in Great Britain. The stallion will stand at stud at Paul Schockemohle's station in Muhlen, Germany.

Reserve champion of the licensing was Ettinger, by Connery out of Eichmedien (by Benz). The chestnut stallion excelled in his trot. At auction he sold to Karl-Heinz Schulenburg from Schleswig-Holstein for 60,000 euro. Ettinger will stand at stud at the Neustadt/Dosse State Stud, where he will be trained by Christian Flamm.

Third placed stallion in the premium ring was Insterpark (by Kasparow out of Insterlady (by Affido xx)). The black stallion sold for 45,000 euro to Gestut Panker.