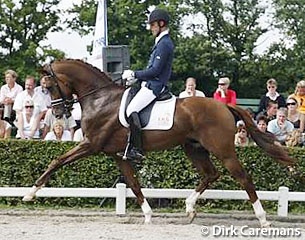 Vivaldi scored two 10's under guest judge riders Seth Boschman and Carl Hester. Boschman liked riding both stallions. "I had a super feeling on both of them. There is actually little to say, except that both stallions are fantastic to ride." British Grand Prix rider Carl Hester was also very enthusiastic about Vivaldi. "He's the best 5-year old I've ever ridden. He's so forwards and has a enormous engine which you only have to steer. I think I want to take him home."

The best mare was Vironia under Christa Laarakkers who landed a fifth place. KWPN stallion Citango (by Contango x Jazz) closed the ranks in sixth place. 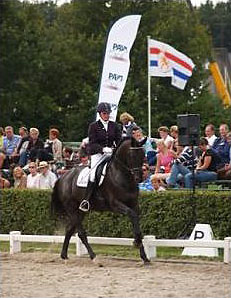 The KWPN licensed stallion Westpoint (by Jazz x Michelangelo) has won the 2007 Pavo Cup Finals for 4-year olds. The black stallion was in the lead from the start, winning the qualification round and final round and scored the highest under guest judge riders Seth Boschman and Carl Hester.

The six finallists, which were ridden by Boschman and Haster, were three mares and three stallions. The mares were Winoa (Jazz x Flemmingh) under Bart Veeze, Wendolyn II (Briar x Donnerhall) under Emmelie Scholtens, and Wodini (Gribaldi x Zeoliet) under Alex van Silfhout. Hester liked the mares very much. "I really like horses that are forwards on their own and three mares were like that."

Westpoint was the winner, scoring 10 under Carl Hester and 8.5 under Seth Boschman. Westpoint had a total of 362 points and became the 2007 Pavo Cup Champion. "It was one of the most pleasant rides I ever had on a young horse," Carl Hester said about Westpoint. "He's got power from behind and moves nicely uphill. Westpoint definitely has talent for the upper level work and is a horse for the future."

Wynton placed second overall with 351.5 points in total. He received a 9.5 from Seth Boschman and 9.0 from Carl Hester. "I liked the stallion. He was fresh and active and very easy to ride," Boschman commented.

The third place went to Karolus van Wittenstein. Boschman scored him 9.5 and Hester 9.0. His overall score was 347 points.