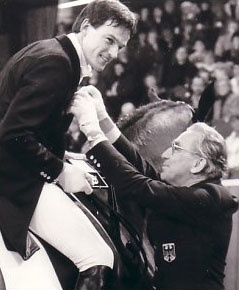 The Horse Magazine and Eurodressage had already hinted at it, but now the Australian Equestrian Federation has finally confirmed the news: Ralf Isselhorst from Germany has been appointed as the news Australian Dressage Coach.

The appointment will take effect immediately and follows the resignation of Ulla Salzgeber in December 2006. While the period of the appointment is intended to go through to the end of 2008, the parties will conduct a review mid term following the Olympic Regional Qualifying event.

Ralf’s career highlights include successful stints with the Korean Dressage team including a top-ten placing at the 1988 Seoul Olympic Games. Ralf is currently based at the facility of the Riding Club in Appelhülsen.

The major focus for Ralf will be to assist Australia based riders to prepare for participation in the Asia-Pacific Regional Olympic Qualifier to be held in Sydney in October 2007, to qualify for Team entry at the 2008 Beijing Olympic Games. National Squad Clinics will be conducted in Sydney and Melbourne in May, August and October in the lead-up to the Qualifier.