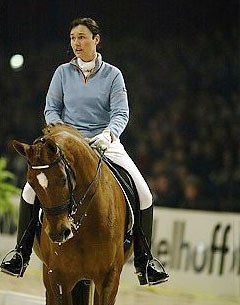 Christa Laarakkers will be succeeding Mieke de Kok as Dutch Pony Chef d'Equipe. This news was announced at the 2006 European Pony Championships last weekend and confirmed today by the Dutch Equestrian Federation.

Mieke de Kok has been pony chef d'Equipe for five years and achieved a team silver medal every single year. Last weekend, Dutch pony rider Angela Krooswijk won individual bronze medal at the 2006 European Pony Championships. "It was an unbelievable time for me; it widened my horizon" De Kok told the KNHS. "I've met many new people I would never have met, so it definitely enriched my life."

The 43-year old Christa Laarakkers will be taking over from De Kok. Laarakkers runs a dressage stable in Groningen and is a judge up to small tour level. "The KNHS contacted me a month ago asking if I wanted to be chef d'equipe. Of course I was honored but needed some time to think about it," Laarakkers said. "I wanted to be sure if I could combine the position with my own competition career. I realized that it should work. I want to do the job with much dedication and motivation and hope to do it as well as Mieke de Kok has done these past years."