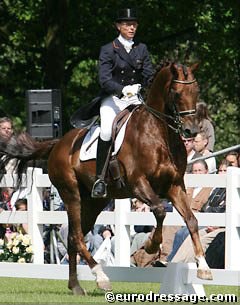 Under O-judge Jan Peeters, the Dutch junior riders teams won three gold, one silver and one bronze team medal and the Dutch Young Riders team won four team silver and one team gold medal. As of September 1, 2006, Peeters will be succeeded by Bartels, who is an experienced youth rider trainer. In Stadl Paura, she was coaching Belgian Young Rider Julie de Deken with Fazzino (Florestan x Rivellino xx).

Bartels is looking forward to becoming the new Dutch Chef d'Equipe "I love doing it. It's a very strong group of young professionals I have to work with, which makes it all the more interesting. New talents are coming up and I think it's a great challenge for me to book the same results as Jan Peeters did with the Juniors and Young Riders," Bartels said on her website.