Escapado Sold to The Netherlands 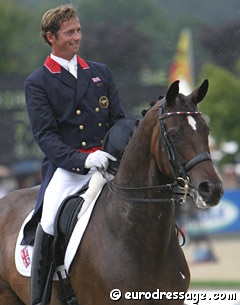 Carl Hester's Escapado has been sold to The Netherlands. Dressage and breeding stable Exquis purchased the 12-year old Oldenburg gelding (by Ex Libris x Ikarus) from Hester and Rolly Luard and will put the horse in training with Hans Peter Minderhoud.

Only two days ago Brit Carl Hester and Escapado finished sixth overall at the 2005 European Dressage Championships in Hagen, Germany. "We wanted to give Carl and Escapado a chance for a nice and fitting goodbye," Stable Exquis reported. "We did not expect him to exceed everyone's expectations. His performance in Hagen confirms the potential we see in Escapado."

Escapado has been in training with British world class performance rider Carl Hester for nine years. He purchased the horse from Michel Assouline, who found him at Gut Fuchtel in Vechta, Germany. As a foal Escapado already sold over the Vechta Elite Foal Auction.

Hans Peter Minderhoud is the quadruple World Champion in the Young Horse division and so far has not been able to break through at FEI level. "Escapado is a horse every rider dreams of. He's beautiful, very talented and in a good way hot to trot. Finally, I can show everyone that I can not only ride young horses, but am also capable to be a good competitor in the big tour."

more news on this sale coming up...