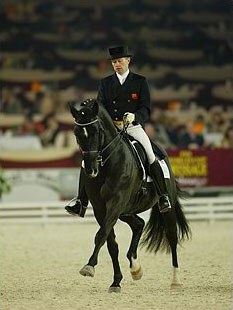 KWPN enthusiasts will get a unique opportunity to see keur stallion Ferro in action in a pas de deux with his licensed son Lorenzo CH at the 2005 KWPN Stallion Licensing in 's Hertogenbosch (NED) on 4th and 5th February 2005.

The pas de deux will be a harmony between two world class Grand Prix horses, choreographed to music from "The Godfather."

Former Dutch Olympic dressage team horse Ferro will be presented by Susanne de Klein, while Lorenzo CH is ridden by his owner Wayne Channon, a British short listed Grand Prix rider who currently lives in Belgium. "The pair are so striking in the way they look," Channon said. "Both have a very strong piaffe-passage and great pirouettes and in looks father and son are so similar."

The 'Ferro demonstration' will open with a parade of the two approved stallions, Ferro and Lorenzo CH, followed by a presentation of four Ferro mares under saddle. Then the Grand Prix pas de deux will be the highlight of the Ferro demo at the licensing.

Ferro's owners Jan Lamers and Adriaan van der Goor invited Channon for the exhibition ride, as his 12-year old Lorenzo CH (Ferro x Wolfgang) is one of the best performing Ferro sons in the dressage world.

Channon is a big fan of the Ferro bloodline and has several youngsters from this line at his stable in Belgium, including a 3-year old Ferro x Don Primero, a yearling Ferro x Sultan and yearling Rousseau x Whinny Jackson.

"Ferro tends to produce the conformation for a Grand Prix horse," Channon commented. "A good piaffe-passage is inherited, but you get it out through training." The now 18-year old Ferro is one of the few horses that was able to score more than 80% at an international dressage show.

Channon and Lorenzo CH have competed at four World Cup Qualifiers this season, but are now aiming to excel in the outdoor season. "My horse is at his best outdoors," Channon explained. "All British Grand Prix riders have until June to qualify for the team for the European Championships in Moscow and we have to do four shows. I want to go to Saumur, Wiesbaden, Barzago and Lipica."

Channon considers the demonstration at the licensing in 's Hertogenbosch a great opportunity for his horse to get acquainted with an electric, indoor atmosphere. "For me it's a great compliment to ride a pas de deux with Ferro and it will be fun to do it," Channon said.