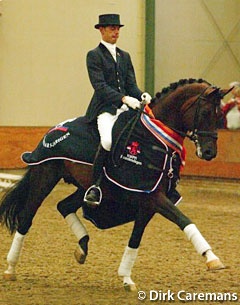 Hans Peter Minderhoud can add two more titles to his already impressive list of achievements. At the 2004 KWPN Paardendagen in Ermelo, Minderhoud won the Pavo Cup Finals in both the 4 and 5-year old division. In the 5-year old class, he was unbeatable aboard World Champion Florencio, in the four-year old division he reigned aboard Sandreo.

The match for the top placings in the 5-year old division wasn't as exciting as the four-year old one. Five year old Westfalian branded and NRPS approved stallion Florencio (Florestan x Weltmeyer) was a league of his own and won the Pavo Cup Finals with 366.5 points, far ahead of second placed Spargo. Ridden by Theo Hanzon, Spargo (Krack C x Boreas) also competed at the World Championships in Verden but the bay excelled more in Ermelo. There, he became reserve champion. Guest judge rider Rien van der Schaft said Spargo was "a fantastic horse" and praised him for his natural balance The British based but Dutch born Leida Strijk finished in third place aboard the 18.3 hh tower of power Stradivarius (Krack C x Contango).

The four-year old KWPN Pavo Cup Finals turned out to be a Sandro Hit and Krack C festival. In 1999 Sandro Hit won the World Young Horse Championships in The Netherlands. This victory seemed to have awakened an interest for this stallion, who is bred out of German bloodlines, with the Dutch breeders. The Sandro Hit offspring, born in 2000, dominated the 2004 Pavo Cup Finals in Ermelo. Hans Peter Minderhoud rode the winner Sandreo, a Sandro Hit x Flemmingh stallion who is licensed for the KWPN society.