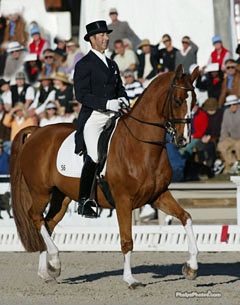 Again today Robert Dover and FBW Kennedy demonstrated masterful consistency and solidity, the hallmarks of their vast experience. They won the Grand Prix Special in the Selection Trials

Dover summed up his two very different rides on Kennedy and Ranier, “honestly, I was actually really relaxed going into the ring today, and excited about especially riding Kennedy today, because I felt so comfortable with him yesterday. . . and then a little bit concerned between the two horses because my first ride had, those problems with kicking up and Ranier was a little disobedient I would say. But the minute I got on Kennedy, I knew everything was fine.”

As much of a picture of consistency that Kennedy was, Ranier decided he wanted things his own way today. Entering the ring with his tell tale tail swishing enthusiastically he proceeded to kick out at transitions and was not terribly focused on the job at hand. ‘He is a very sensitive horse with a huge amount of character and he can be lovely and he can be naughty,” said Dover. Ranier's willful ways today only got him to 8th place and a score of 68.320%.

Once again, Gunter Seidel earned both second and third places today. His horses finished in reverse order of each other from yesterday with Nikolaus 7 second with 75.320% and Aragon, a former jumper from Bavaria, third with 72.640%. About Nikolaus Seidel observed, “I thought yesterday he was good already, and today I just tried to improve some little other things, things I didn't like so much yesterday and it worked pretty well. It was a really nice flowing test, it was just comfortable and easy to ride.”

Steffan Peters on Floriano finished fourth with 72.340%; Tina Konyot was fifth at 71.8% with the crowd pleasing mare Anna Karenina; and Leslie Morse and the stallion Kingston sixth at 71.080%.

Peters admitted Floriano's performance this weekend took even him by surprise, “I'm very, very excited about Floriano, he's such an extremely willing horse to work and sometimes too much. The horse has incredible elasticity and three fantastic gaits. There's still lots of room for improvement and I just talked to Klaus (Balkenhol) a little bit when we got done and there's a lot of decisions that have to be made this week. It's exciting to make those decisions. Obviously, coming into this competition I would have put my money on Grandeur, that he would have been the higher placed horse. The whole season at every single show Floriano got a little bit better but it's a bit unexpected that he should move that far ahead of Grandeur so we have to make some very realistic decisions if he qualifies for the top five and goes to Europe.

“This is my first year in the Grand Prix with the mare, and it's all a little bit green,” commented Konyot about Anna Karenina. “I'm very proud of her that she's gone this far, I mean, she's never done the Grand Prix before. She was much better today than yesterday. I'm polishing up little things, it's all rider error on my part. She's the most wonderful mare to ride, I think I was just using a little too much spur in the piaffe and doing some things that were throwing her off a little bit. No stress this week, we'll have a normal week and see how it goes this weekend. She's a wonderful girl.” The crowd didn't seem to notice some of Konyot's self-described errors and warmly applauded their elegant performance.

For Leslie Morse these trials are a work-in-progress. “For me this week I did what I set out to do, to show consistency and no matter what the day was like to show that I can get above a 70,” she said. “And just to build more confidence within the horse, with me, with the judges, with the crowd, to show no matter what the day is we can do the job of the test and ride clean. For me that's a huge accomplishment and I'm very proud of us. We all know Kingston can be brilliant, that day's going to come. Hopefully, it will be next weekend in the Freestyle. This weekend we showed the consistent ride, a steady Eddie, and next weekend I definitely want to show the other side.”

Competition continues next weekend at Oaks Blenheim in San Juan Capistrano with a Grand Prix on Saturday, June 19th and the Freestyle on Sunday, June 20th.