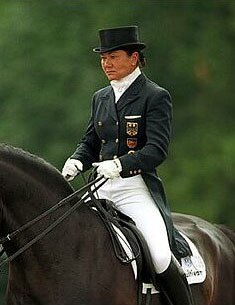 According to Horse-Gate, the Oldenburg licensed stallion Don Cardinale has been put in training with Karin Rehbein. Don Cardinale is by Donnerhall x Feinbrand and was bred by Heinz Kohl.

He was licensed in Oldenburg in 1999 winning a premium title. In 2001 he did his stallion performance test in Adelheidsdorf, finishing fourth overall with 124,95 points, ranking fifteenth in the dressage index and fifth in the show jumping index

The now seven-year old Don Cardinale finished third in the 2000 Oldenburg Regional Championships and was trained up to third level by Marcus Busch. In 2002, Busch and Don Cardinale became reserve champions at the Oldenburg Regional Championships. The black stallion has always been stationed at Josef Kathmann's, but is now located at Gestut Gronwoldhof, where Rehbein will be preparing him for FEI level.

Related Links
2003 Oldenburg Stallion Licensing in Vechta
Karin Rehbein and Cherie, a League of Their Own