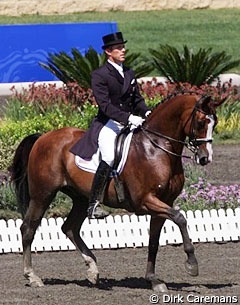 He was immediately transported to the universitary clinic near Horsley Park where an operation was being considered. After a few hours Foltaire, by Voltaire, improved slightly so an operation was no longer necessary. The day after Foltaire was allowed to return back to the Olympic equestrian park.

Gunter Seidel is very disappointed as the chance for participating in the Games is as good as nil. Nevertheless is the American Team hoping for the best. (ed.note: Foltaire recovered quickly and was able to compete)