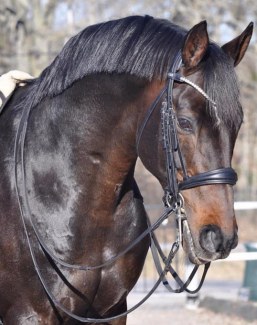 The 17-year old Hanoverian licensed stallion Highcruiser has passed away. Standing at stud and popular in Sweden, the dark bay was euthanized on 16 June 2020.

Highcruiser was by Hohenstein out of Landung (by Lauries Crusador xx x Bolero x World Cup I). He was bred by Johann von der Decken.

The stallion was approved at the 2005 Hanoverian Stallion Licensing in Verden and did his 30-day stallion performance test in November 2006 in Neustadt/Dosse, where he scored 8.25 for dressage and 7.10 for show jumping. He totaled 7.88 and placed 20th out of 39 participating stallions.

Highcruiser only competed once in Germany in a riding horse test in Neustadt/Dosse in July 2006 under Dietmar Schutz.

Highcruiser's breeding career took flight only after he sold to Sweden in 2007. He stood at Myrsjö Gård and produced 358 offspring. His first year at stud he covered 75 mares (2007). In 2008 he covered 81 of them and after the first successes of his offspring, there was a revived interest in him between 2014 and 2018) during which he still covered approximately 45 mares a year.

Highcruiser was also competed at national level in Sweden. He was competed by Alexandra Nord, Jonathan Medin, Stephanie Wretmo, and Rebecca Jarmeus and retired from sport in 2018.

"After a trauma in the pasture, there was nothing more to do," said Myrsjö Gård about the sudden passing of their stallion. He was put to sleep.