From Flying Past to Flying Change - Part II: Thoroughbred Champions Between the Wars 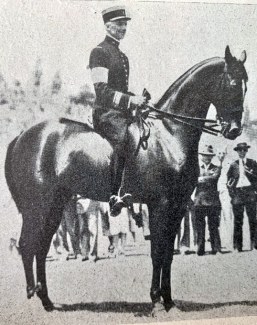 (Part 1: From Flying Past to Flying Change: Thoroughbreds in Dressage Competition)

While dressage became an Olympic discipline in 1912, the FEI was only founded at the end of the 1920s. After its foundation official international dressage competitions began.

Apart from the Olympic Games every four years there was no extensive competition circuit like we know today. Only a few international contests under the wings of the FEI took place and only in Europe, where the sport almost exclusively happened at that time. In those years between two Olympic Games, the highlight on the show calendar were the so-called FEI championships, to which countries sent their best riders.

One year before the 1932 Olympic Games in Los Angeles a tall long-legged dark thoroughbred took center stage at the CDI in Vichy and won ahead of the Germans. The 9-year-old Taine xx (by Mazzara xx) was born on a stud farm in Normandy to become a steeplechaser like his successful sire, but it was not meant to be and the French army bought the noble gelding.

In the upcoming years he was trained by Captain Robert Wallon, a two time Olympic rider of the Cadre Noir in Saumur, who not only dealt with the gelding’s physical challenges, a result of his specific conformation which every photo easily reveals, but also with Taine’s feisty and delicate temperament, which made the horse rather spooky.

Colonel Xavier Lesage took over the ride when Taine was almost Grand Prix ready and prepared him for the 1932 Olympic Games under the guidance of Saumur’s chief and Olympic rider Colonel Danloux.

Taine was the favorite for the upcoming Olympics in the USA, because deeply affected by the Great Depression only France and Sweden were able to send dressage teams over the pond to compete against the USA for one of of three team medals. France captured team gold medal and Taine xx, as expected, got the individual gold well ahead of the others.

Some may say Taine xx achieved an easy victory there with the German horses absent to challenge him. On the other hand, the French thoroughbred had been a really extraordinary horse with his nobility and his light expressive way of moving. He made it look like he was doing it on his own accord, something German legends like the 1928 double Olympic champion Count von Langen or Felix Bürkner expressed the deepest admiration for. Taine xx as the Olympic dressage champion was then invited to show his winning ride again during the closing ceremony of the Olympic Games, in front of more than 100,000 spectators in the Colosseum of Los Angeles.

While Taine xx left a lasting impression, his career was cut short and at the next Olympic Games in Berlin 1936 other thoroughbreds caught the eyes of the experts. (More about Taine her)

At the 1935 FEI championships another thoroughbred won and drew the attention of the equestrian world. Austria’s Alois Podhajsky, not yet as known in dressage as he was to become, rode the just  8-year-young bay thoroughbred to victory in Budapest; something the Germans took notice of, at the time as they were preparing their candidates meticulously.

Nero xx was quite different in looks to the outstanding, long-legged Taine xx. Born in Germany as Sindbad xx (by Dark Ronald xx), Nero xx did not fulfill the expectations on the race-track and was sold for only 2000 Austrian shilling to the Austrian army, where the horse was allocated to Podhajsky. His sturdy Austrian warmblood mare Nora had launched Podhajsky's name in the dressage world.

Being described by his rider as very intelligent, good natured, but also a bit anxious by nature, Nero xx had very good gaits and learned fast. The gelding competed internationally between 1934 and 1939 and achieved consistent success against the top warmblood horses of his time. At the Olympic Games in Berlin 1936 he won the individual bronze medal behind the two Trakehner geldings, Kronos and Absinth, ridden by German officers whose supremacy was never endangered. However, ten days later Nero xx managed to win two S classes at Aachen against the majority of the Olympic horses.

At the 1937 FEI championships in Berlin he came second behind Absinth and he was fifth in 1939. The outbreak of World War II cut Nero’s consistent career short, but he won his last show at Insterburg in 1939 and finished his career on a high note. Today most relate to his rider Alois Podhajsky as the most influential man the Spanish Riding School in Vienna ever had. However it was Nero xx who made his rider's name before the Lipizzaners spread their glory all over the world after the war.

It was this narrow thoroughbred who contributed strongly to the rescue of the Spanish Riding School in the last days of WW II. Already evacuated to the town of Wels, the Lipizzaners’ and the school’s future was uncertain when a US major, who had seen Nero xx compete in Berlin 1936, discovered the horse in the stables. Happy to see that celebrity again, he helped Podhajsky to make contact with General Patton, who took the SRS and their horses under his protection. The rest is history. (More about Nero here)

While Taine xx and Nero xx undoubtedly are the most successful and renowned thoroughbreds in dressage between the wars, they also represented different types of the same breed with different challenges to overcome in their training.

Talking about the horses at the 1936 Olympic Games in Berlin, Dr. Rau stated that the ideal thoroughbred should have "strong bones, a perfect balance in all gaits, four excellent legs and the highest expression in all three basic gaits. It should own much neck, a noble head, a light poll, a good mouth and a not too excitable temperament.“

Very rarely a thoroughbred represented the ideal riding horse type, but warmbloods weren't built in an ideal way either. But there was one that came close: the remarkable English thoroughbred His Ex xx.

Born in 1925 he had a long and distinguished career with his rider between 1932 and 1942. Under Peder Jensen from Denmark this bay gelding represented the perfect type of horse for dressage and he would not look out of place today, with a lot of nobility and elegance. Not only was this pair a record nine-times Danish dressage champion, but it also placed seventh at the Olympic Games in Berlin where they were the sole Danish pair in this discipline. Over the years His Ex xx and Peter Jensen took a stand against strong international opposition, for example in the Berlin indoor show or at Aachen.

Whereas most countries competing at FEI level relied on both warmbloods and thoroughbred horses, the USA were in a special position back then. Their equestrian sport was dominated by the US army and their cavalry school in Fort Riley, Kansas. They mainly relied on thoroughbreds and horses bred in the remount services.

Dressage was a discipline practically nobody was really interested in the USA before the war, even if the 1932 Olympic Games had caused remarkable spectator interest. There were simply no trainers who could have helped the few interested. The outstanding pioneer of US dressage was Hiram Tuttle, an inductee in the USDF Hall of Fame  in 2002.  With his autodidactic talent he trained his private horses to Grand Prix level.

In 1929 Tuttle received a 5-year old French bred steeplechaser, appropriately named Olympic xx, who went lame on the race-track after having been imported from France. Within a little over three years Tuttle, who had paid 1 dollar for the big framed 17-hh thoroughbred, trained him to Grand Prix-level and won a double bronze at the 1932 Olympic Games in Los Angeles. Although those Games only had three teams at the start, Tuttle beat renowned riders from France and Sweden to earn the individual bronze, the only individual medal US dressage riders have won so far at an Olympic Games!

The US dressage team of 1936, just like the one of 1932, was an "all-thoroughbred-team" of which two were trained by Tuttle and one by his training partner in Fort Riley, Colonel Isaac Kitts. Olympic xx was made available to his team mate Captain C. Babcock junior, while Tuttle rode the 9-year-old chestnut Si Murray xx whom he had bought in 1930 at the race-track of Havana in Cuba. Kitts was again competing his long-time partner, the ex steeplechaser American Lady xx whom he started training in 1931 at the age of 11 and had brought on the 1932 Olympic team.

Success cannot always be measured in wins and placings alone , but Tuttle and his thoroughbreds paved the way for dressage in his country, which is now part of the best in the world. His numerous exhibitions throughout the USA, also several times at Madison Square Garden, gave horse mad people a first idea about a discipline,  which has truly flourished in the USA as of the 1970s.

In Germany the highly valued thoroughbreds Inca xx, Pommerländer xx and Strachur xx were considered serious candidates for the next Olympic Games in 1940 and got trained by their assigned officers under Otto Lörke’s eagle eyes at the cavalry school in Hanover. This was in a way remarkable as Germany was one of the leading countries in warmblood breeding, even back then, and several German bred horses were to be found on foreign dressage teams at the 1936 Olympic Games.

The 1936 Olympic Games in Berlin had a record starter field of 29 horses of which 9 were thoroughbreds and three of them winning medals.

This is surely owed to the fact that Otto Lörke adored sensitive horses with a lot of blood and he was the most influential figure for German dressage at that time, and beyond. However, the outbreak of the Second World War forced the cancellation of the 1940 Tokyo Olympics. Many riders, instead of competing for honours, were now fighting for their countries. More than just a few lost their lives, like millions of other people in the years to come, in a most barbaric war.

Countless horses suffered the incredible hardship being part of a war dominated by mechanization. Famous horses were killed or captured. Others like Absinth, the gold and silver medalist in dressage of 1936, were never seen again. The end of the war would see a timid return of equestrian sport and thoroughbreds would find their place again, like before, as medalists in dressage.

Coming soon Part III: The Thoroughbred from the Post-War Times to the 1970s

By Silke Rottermann
Photos reproduced with kind permission of ST.GEORG and FEI

Related Links
From Flying Past to Flying Change: Thoroughbreds in Dressage Competition
Taine, a Thoroughbred on Mount Olymp
Nero xx, From Failed Race Horse to Olympic Dressage Medalist
Louise Robson on a Mission Appointed by Her Majesty