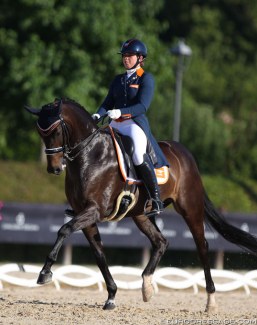 Dutch Under 25 Grand Prix rider Jasmien de Koeyer is back on track and has refound her confidence in the show ring after experiencing a big blow from the elimination at the 2019 European Under 25 Championships last summer.

Jasmien de Koeyer and her own 10-year old KWPN mare Esperanza (by Desperados x Krack C x Jazz) went to the 2019 European Championships in San Giovanni in Marignano, Italy, as one of the clear medal favourites. However, the rider twice went off course in the Intermediaire II team championship test and was therefore eliminated from the class and the rest of the competition.

"I had a small blow from that. It was disappointing and I was so bummed out," De Koeyer admitted in an interview with Horses.nl. "For a while I was mentally totally off course."

De Koeyer called in the help of  sport psychologist Sanne Beijerman to process the blow and for mental advice.

"Sanne got me back on track. I didn't want to compete any sooner because I didn't feel mentally strong enough. It was a conscious choice. I wanted to feel strong, which you need at this level. I'm very happy that I waited," said De Koeyer.

Jasmien and Esperanza returned to the show ring at the regional event in Utrecht this weekend. She scored 70.962% in the Short Grand Prix and won the class, which served as first selection trial for a national class held at the 2020 CDI-W Amsterdam in January.

"We picked up where we had left off and went for it. My goal was to get a good feeling riding and it turned out well. I had such a good feeling that the test was over before I knew," she said. "I had too short a warm-up but Esperanza handled it in a super way. She has become more steady recently and had developed in a good way. I don't have to ride her so much and can focus more on the finishing touches."

Read the entire interview on Horses.nl (in Dutch)