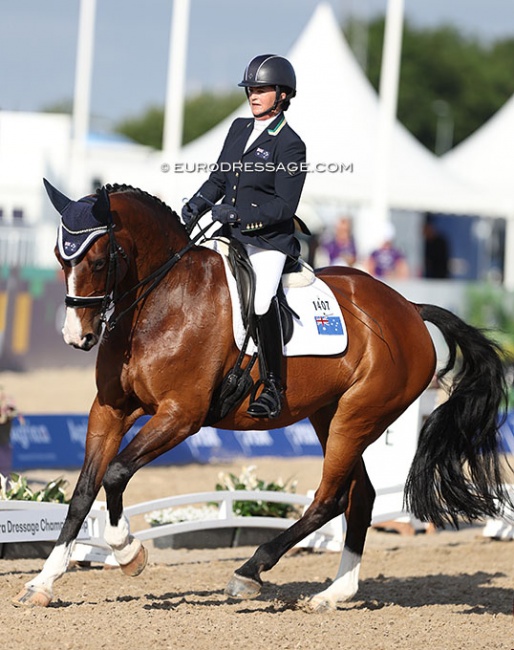 Cil Dara Cosmic was a 17-year old Australian bred warmblood by Cooperit out of Belcam Aacken (by Argentinus).

She was bred by from Nick and Sara English at Cil Dara stud in Biddaddaba, Queensland, AUS, and Jodie Barnes bought her as a 3-year old, having decided to switch from showing to dressage.

The mare made her international show debut in under Jodie Barnes at the CDI Boneo in January 2014. The pair competed at their first and only international at small tour level.

That same year Cosmic suffered from a bout of colic and was operated on at South Eastern Equine Hospital. She returned to full fitness and Jodie trained the bay, who was nicknamed "Stella" to Grand Prix level.

In 2016 Dianne had ad spinal surgery (C5-6 and C6-7 anterior decompression and fusionà and in 2019 she had a left hip replacement. In 2020 Dianne was diagnosed with Parkinson's and Dystonia.  Daughter Jodie offered  up Stella for her mum to ride.

Eight years later after Cosmic first CDI in Boneo, the bay mar returned to the international arena as a para dressage horse under Dianne.

The duo premiered at Boneo's CPEDI In April 2022 and competed at the same venue again in June.

The Australian team selection for Herning was a turbulent one as the Australian equestrian federation first decided not to send a team at all and then changed its mind after major uproar on social media.

After Herning, Cosmic was retired from sport and supposed to enjoy a long retirement out hacking on the trails and going to the beach, but on 6 December the family had to let her go. Barnes still has two 2-year old offspring by embryotransfer out of Cosmic.