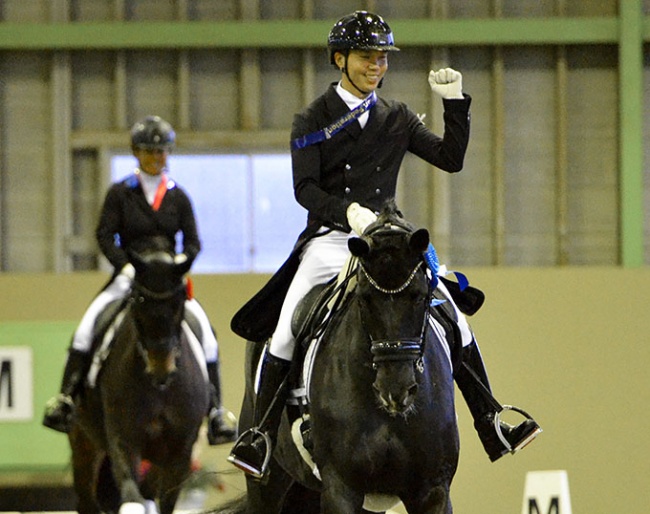 The event featured a big tour Championship as well as some small tour classes. For the National Championships the results of the Grand Prix and the freestyle were totalled.

Ten combinations competing in the Championship, but just two of them were current international team riders.

The winner and new national champion is Yusuke Hasegawa aboard Zingar Northside, an 18-year old Dutch warmblood by Gribaldi x Damocles. The pair was third in the Grand Prix with 65.370% and won the freestyle with 70.110 to achieve an overall winning total of 135.480 points. Hasegawa has only one CDI start on its record, the 2020 CDI Lier in Belgium, but on national level is gaining mileage on the schoolmaster.

The silver went to Naoko Hieda on the 12-year old Westfalian Fantastico (by Flanagan x Contini) who collected the same silver medal at last year's championships. The pair posted a winning 65.739% in the Grand Prix and placed second in the Kur with 69.220% to total 134.959 points.

The bronze was for Toshiya Kawabata on the 15-year old Westfalian Dynamic (by Diamond Hit x Florestan). They were second in the Grand Prix with 6(;(4"% and landed fourth place in the Kur with 68.590% to finish third overall with 134.133 points.