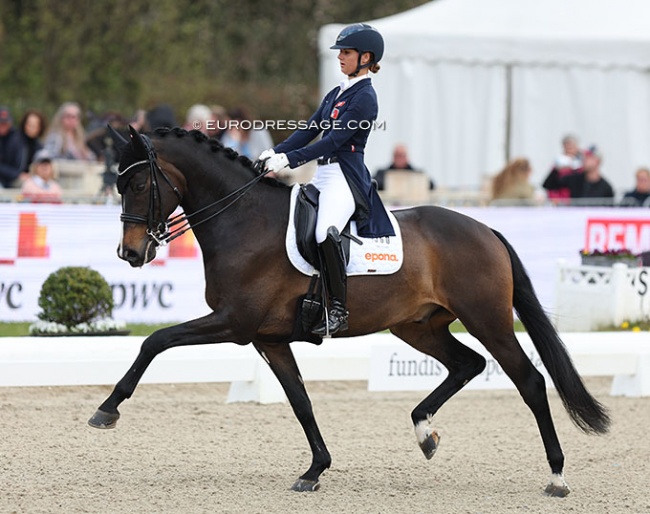 Estelle Wettstein and her Grand Prix horse Great Escape Camelot are no longer a combination. Owner Anne Bos has decided to move the gelding to Germany.

Great Escape Camelot is an 11-year old Dutch warmblood by Johnson out of Amie Camelot (by Turbo Magic). He is bred by C. Kerssens-Rademaker and owned by the Swiss duo Anna and Theres Boss.

"Grady" arrived in Switzerland at riding stable Lohnmoos as a 3-year old in the spring of 2014.

He was first trained there and competed in the 4 and 5-year old young horse classes.

Charlotte Pfeiffer Blanc showed him at L-level at the start of 2017,

In the late spring of 2017 Great Escape moved to the Wettstein family where he continued his training to FEI level.

Hans-Peter Konle also presented him in a few jumping classes, alternating with Estelle Wettstein who competed him in dressage.

As of 2019 he focused solely on dressage and made his international show debut at small tour level at the CDI Fot in September 2019. In 2020 Wettstein moved him up to medium tour level and by 2021 they were showing at Grand Prix level, first in Hagen in the senior tour and a month later in Compiegne in the Under 25 tour.

With two Grand Prix horses to ride, Estelle's first choice for the 2021 European Championships in Hagen was Quatorboy while Grady was competed in the CDI 3* leg at that event.

In 2022 the pair found its stride at Grand Prix level and prepared for 2022 World Championship team selection with starts in Ornago, Hagen, Mannheim, Compiegne and Rotterdam. They were nominated on the Swiss team, but Estelle unfortunately had to withdraw from Herning as her father suffered a heart attack and was in recovery. In October the pair won silver at the 2022 Swiss Grand Prix Championships.

Their last start was two weeks ago at the CDI Stuttgart where they posted 68.739% in the Grand Prix and 75.570% in the freestyle.

On 30 November owner Anne Boss announced that Great Escape Camelot moved to Aubenhausen, Germany, where he will continue his training under German U25 rider Raphael Netz.

Boos told Eurodressage that, “we were happy for 8 years and in close cooperation with Marie-Line Wettstein and the Wettstein family,” adding that “family changes” in the stable led them to decide to move the horse.

Wettstein told Eurodressage, "I was very happy with him in Stuttgart! And it was a incredible competition, but the owner decided to bring him to Aubenhausen and I wish all the best to Raphael. Grady is amazing and such a lovely guy! I'm sure he will have an amazing time with him.
I‘m really sad but happy he‘s in such good hands."