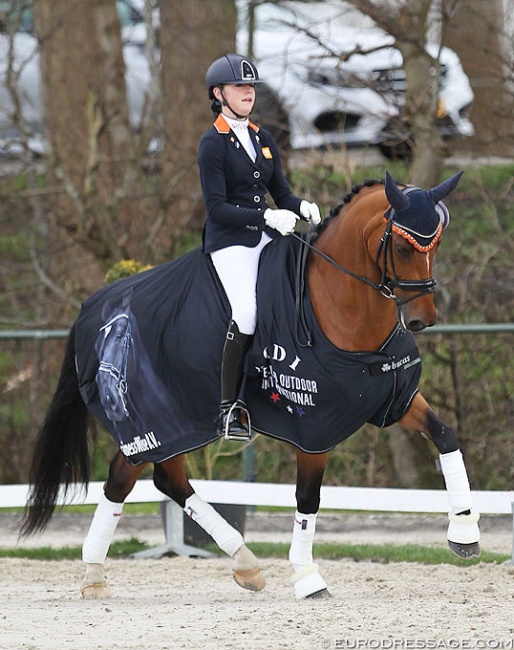 Happy Feet, a former Dutch children team pony and the 2017 and 2018 European Children's Champion, has been sold.

The 15-year old Dutch warmblood Happy Feet is by Tuschinski out of Ereara (by Animo). He was originally named Coltrane and bred by C.J. van de Bergh.

At the end of 2018 he was allocated to pony rider Jill Bogers, who rode him at the CDI Exloo in October 2018, but then moved to Anne Uijtewaal, immediately followed by pony rider Senna Evers who began competing him in 2019. Evers and Happy Feet  were selected on the Dutch team for the 2019 European Children Championships in San Giovanni in Marignano, Italy. They won team silver, but individually landed seventh place.  At the 2019 Dutch Children Championship they won bronze.

Kebie had hoped to keep on riding Happy Feet in the junior division, but owner Linda van Woudenberg decided otherwise. Not willing to sell the pony and preferring him to stay in the children's division instead of junior, Van Woudenberg sought a new rider and found one in Robin Dicker.

Dicker competed the pony at one CDI, the 2021 CDI Opglabbeek. It was their first and the pony's last international show, so far. Happy Feet disappeared from the CDI show scene while Dicker campaigned another horse, Helena, at international children's level this year. In July 2022 Dicker brought Happy Feet back to the national show ring after a 10-month competition break. They won the children class as sole competitor on a score of 72,325% in the Anemone Horse Truck Cup qualifier in Bergschenhoek. In September they competed in the Tolbert qualifier and got a personal best of 80,125%.

Van Woudenberg decided to sell the 15-year old Happy Feet and found a new owner and rider in Eliev Verstappen, who trains with Jacqueline Fiechter.

"This is the best choice for Happy," said Linda. "I always said I'll never sell Happy. There was a lot of interest from abroad but I always turned them away. If I were to sell, it would be in our own country."

Happy Feet has moved to Verstappen's brood farm Beauvande. She will be his seventh rider in six years time.