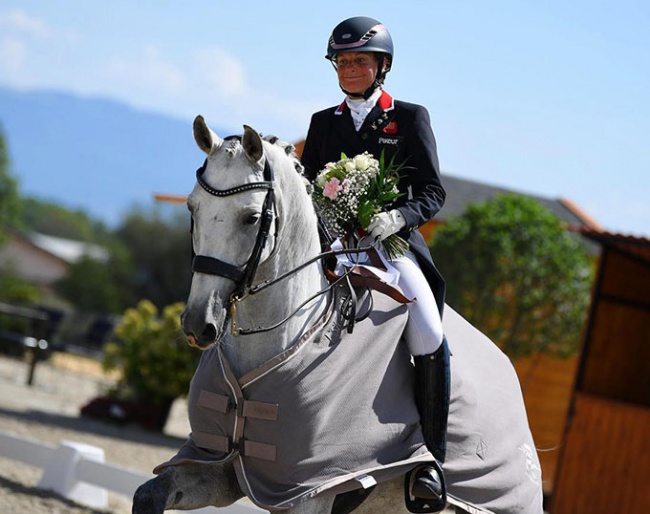 Anna Ross was unbeaten at the recent Crozet CDI3* in France on 25 – 28 August 2022, where she swept the board in the Middle Tour with Marcelo Tosi’s exciting grey mare, Habouche.

Held at the Jiva Hill Stables in the foothills of Jura mountains, facing Mont Blanc, the surroundings provide a stunning backdrop for the popular Crozet CDI, where the British duo of Anna and “Holly” posted three convincing wins out of three starts.

Anna and the 10-year-old Ampere x Ustinov mare (pictured in July), who is owned by Brazilian Olympic event rider Marcelo Tosi, topped the leader board in the Intermediate A, Intermediate B and Intermediate II with scores of 70.059%, 68.811% and 70.765% respectively to raise the British flag on three occasions.

“I was really really happy - I was thrilled,” commented Anna about her performances with the expressive KWPN mare. “She has always shown a lot of potential, and although she’s been competing Grand Prix at Premier Leagues shows, I wanted to compete her at Middle Tour to build up her confidence.

“Holly really thinks she is the queen of the arena. She’s a big-moving, bold horse and is lovely to ride in the arena - she just needs time to be able to ‘close up’, so it’s good for her to do some Middle Tour.

“She’s an absolute bomb with so much power, so she has to learn to balance and contain it all,” continued Anna. “She was given 9s for the trot extensions and 8.5s for the pirouettes, which are becoming a highlight. I was delighted with her.”

Habouche, who has recently been awarded the British Hanoverian Horse Society’s prestigious Performance Mare Award, already has eight embryo transfer foals on the ground, with two due next year by Blue Hors Zackorado who is currently in Ermelo competing in the six-year-old division at the FEI WBFSH Dressage World Breeding Championships.