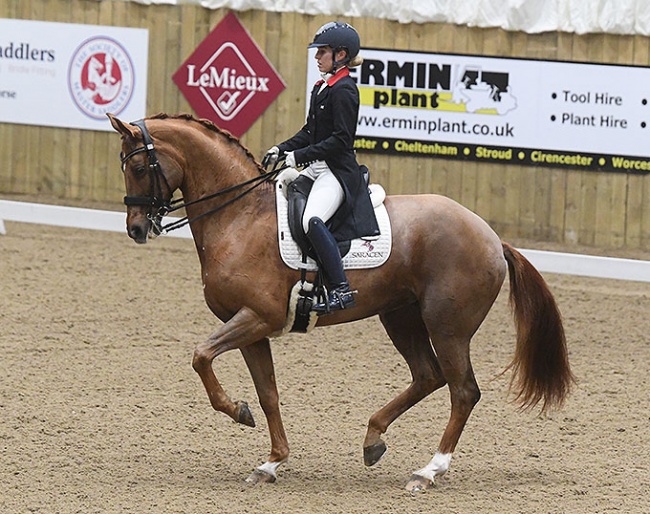 KOM Fairy Tale is a 16-year old Finnish warmblood mare by Furst Heinrich out of Weltmaid Willow (by Weltmeyer x Wanderkönig). She is bred by by Anna Leena Meller (Runtti) and Eva Nordman.

From Sweden to Germany

The mare was sent to Sweden to be trained by Peter Mansson and began her competition career in 2011 in the young horses classes. She returned to Finland at the end of 2011 and stayed there with the breeder until 2014.

In 2014 she was sent to Swedish Carolina McLean and her Australian husband Warwick McLean in Germany to be trained and sold. They competed her at a few local shows.

In 2015 Kom Fairy Tale sold to Emma Blundell of Mount St. John stud and the ride was allocated to Charlotte Dujardin, who was in search of a successor for her retired Olympic champion Valegro.

Dujardin made her national show debut on the sensitive chestnut two years later in the spring of 2017 at small tour level and took her to the British Small Tour Championships in September that year where they finished third in the Intermediaire I.

Two mare disappeared from the show scene to return two years later  at small tour level under Sam Duckworth. In the summer of 2019 he rode her at Intermediaire II level, before losing the ride on her.

The mare was sent to Amy Woodhead who made her national show debut in February 2020 at Inter II level. They rode their first national Grand Prix test in September 2020. The pair competed in three CDI's in 2021 (Wellington, Hartpury, Keysoe) with a 69.255% in the Grand Prix Special as best score. The pair won the 2021 British Intermediaire II championship.

With Amy Woodhead being pregnant, the ride on KOM Fairy Tale has been allocated to Stella Hagelstam. She is her hopeful for the 2022 World Championships in Herning (DEN).

"After Julia (New Hill Julitrea) got a tiny injury in February and needed a couple of months of recovery, I couldn’t imagine what was waiting for me just around the corner," Hagelstam wrote. "I was of course a little disappointed and prepared to have to give up my dream to ride in WEG this year but then something amazing happened and here she is now."

While the 17-year old Julitrea (by Revan x Alcatraz) is recovering from injury and now based in Germany to be flushed for an embryotransfer, Stella will direct her attention to Fairy Tale.

"She is though a very sensitive top horse and ridden by the best of the best," said Stella. "I have an extremely short time to get to know her before the qualifications starts so I will do my best and see how far that can take us."