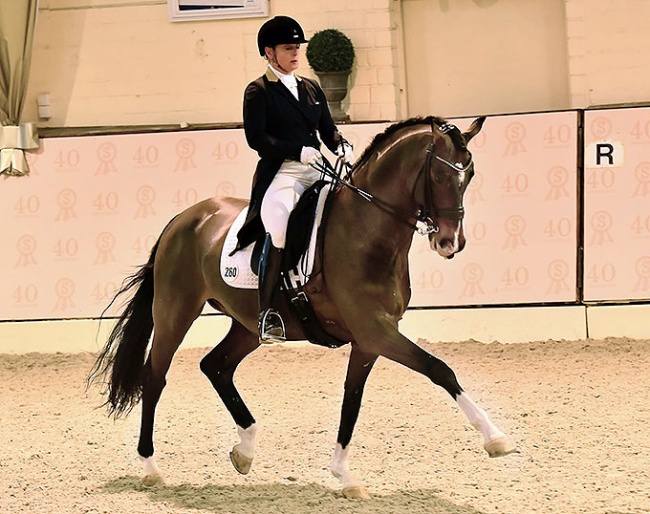 Den Haag is gelding by Diamond Hit x Florestan x Werther.  He is bred by Dieter Kellermann and is out of a full sister to Fidermark.

Den Haag was licensed at the 2010 Westfalian Stallion Licensing and moved into training with Beatrice Hoffrogge (née Buchwald) who was first based at Johann Hinnemann's and then at Isabell Werth's stable.  Beatrice developed him to Grand Prix level.

The pair was 8th at the 2013 Bundeschampionate for 5-year olds and fourth in the finals for 6-year olds at the 2014 World Championships for Young Dressage Horses in Verden, Germany. In 2016 Buchwald competed the horse in the Nurnberger Burgpokal qualifiers, but between the summer of 2016 and the spring of 2018 there were no shows for Den Haag.

In the autumn of 2016 Buchwald moved from Werth to Manfred Hödl's stable in Rhineland and Den Haag joined her.

The pair returned to the arena a year and a half later at a local show in Wupperfurth in April 2018, at Grand Prix level. It was his only show of that year. Den Haag was also gelded around that time.

A year later Den Haag was shown in the Intermediaire II in June and July 2019 at shows in Werder and Bettenrode.  The July show was the pair's last

Den Haag moved to Isabell Werth's yard in November 2019 to be sold.

Werth made her show debut on Den Haag at the CDN Ankum in January 2020 and competed him five times in total that year their last show being in October 2020.

In July 2021 Den Haag returned to the arena for an S*** level class at a local show in Hamminkeln under Werth's assistant rider, Austrian Lisa Wernitznig.

The gelding has now been sold to 44-year old Japanese Akiko Yonemoto, a student of Heiner Schiergen.

Yonemoto, who is the daughter of Katsumi Yoshida and part of a Thoroughbred horse racing dynasty in Japan, has been competing in Europe in dressage for the past twenty years.  She began in 1999 with Gigolo (by Clongish  x Tempelhüter), then added Ravell (by Rubinstein x Cardinal xx) to her string, as well as Laudarius and Felix (by Werther x Wenzel). Her first Grand Prix horse was Elmegardens Fight (by Fruhling x Locarno) which she bought at Hof Kasselmann and showed at international GP level in 2005 and 2006.

In 2018 Yonemoto bought the Westfalian small tour horse For Comtess Royal and in 2019 she added Grand Prix stallion Aaron (by Florencio x Record) to her string as a Tokyo Olympic hopeful, but the pair never competed internationally.  She made her debut on Aaron in March 2020 at the regional show in Troisdorf and then only returned to the arena in October 2021 to compete the horse four more times in the autumn.