The Dilemma of Pads and Nosebands 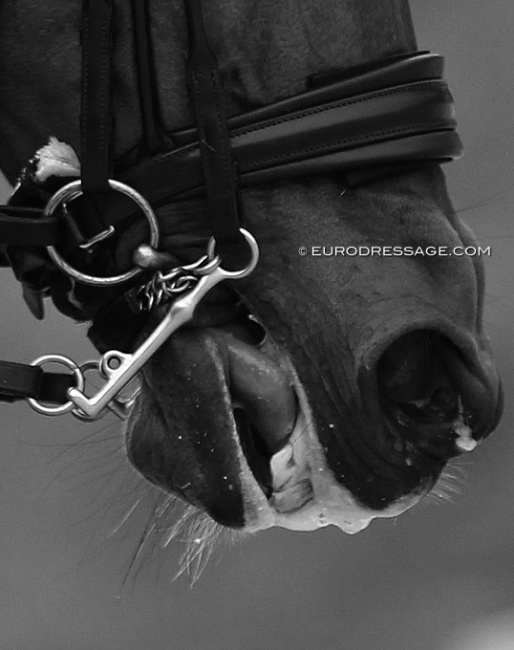 Horses wearing a noseband shouldn't be that complicated. If you use it, you just fit it correctly and it then won't bother the horse. It is kind of weird how such a traditional, simple, and neutral piece of equipment has slipped into this position, where people argue if it is even ok to use one. Discussions around nosebands are full of different kind of myths, arguments, and listings of pros and cons of using a noseband.

It is of course extremely troubling that there have been too many examples of extremely tight nosebands at the high level, which is a real concern for both equine welfare and the reputation of equitation as such. There are official rules in the FEI dressage rule-book and the stewards manual for correct fitting of the cavesson, but these rules still allow different ways to use the noseband in practice. And after all, it is not the equipment, it is the daily user which defines how the equipment affects the horse. Effects of negative examples can reach a longer way than anyone could imagine, especially nowadays with social media and pressure from outside the equine community.

In the tradition of equitation, the noseband seemed to be just a flat piece of leather that didn't bother the horse and was more decoration than anything else, so what happened to this tradition?

The words we hear

Almost every rider knows or knew a rider or trainer that routinely used to tighten the noseband “enough” to stabilize the bit or fix a visible contact or tongue problem. Many of us have done this ourselves at some point of our riding career without thinking about it too much. Many have just learned to tighten the noseband “properly,” and many simply didn't know better back then.

What is interesting to me regarding these examples are the words when the result becomes something different. Doing something “properly” and “enough” seems like something correct, right? Even a surprisingly tight noseband can seem to be fine to an uneducated eye. You could even tighten the crank or pull-back cavesson with all your strength and still fit a whole hand at the side, exactly the spot where the FEI steward manual foresees the noseband check in dressage and where one index finger is required to be pushed under…

This optical illusion could mask the tightness of noseband in case you didn't know how it affects the horse. If the noseband is too tight, the horse can't swallow or use the jaw and mouth normally, and in severe cases it could also affect the breathing. The latter is only the case if a type of noseband is used which runs in front of the bit, like a drop, a grackle or a flash noseband. With a tight noseband, the horse can easily bite the cheeks when trying to open the mouth, causing painful lesions of the mucous membrane.

It becomes tricky if an authority says it's ok to tighten the noseband; if you may see many people doing it successfully, and it may start to seem normal at some point. If it is common, it doesn't seem like a big thing anymore. The examples we see from those we look up to can leave a strong imprint and I wish those examples to be as correct as possible for everyone.

Basically, people want the best for their horses. Sometimes you just don't know what's the right way and, usually, there is someone that chooses a quick fix if that is commonly used and there is one available.

Sounds Kind? It Gets Tight

Yet trends come and go and when I was around 15 or 16 years old, which is now more than 20 years ago, it became trendy to use a pad under the noseband, below the jaw. I saw how the more experienced riders used it and the idea seemed so logical – it would make the bridle more comfortable for the horse. The pad was quite thick, and we used to call it “juppikudde” which in Finnish-Swedish meant something special that is trendy, fancy and soft. That sounds so nice and innocent, and I of course wanted to get one of those too.

At that time those pads were made of 2-layers of camping mattresses covered with fleece or other soft material. There was only one catch. To be able to keep the padding under the noseband, it needed to be tightened enough so that it wouldn't drop while riding. Practically you had to skip the good old 2-finger rule to be able to use the extra pad. This didn't seem like a problem because you wanted to be kind to the horse, and the more experienced riders used to say that the horses like the pad, because they don't open the mouth with it.

Little did I understand at that time because it didn't come onto my mind that using the pad meant a tighter noseband which of course made the opening of the mouth more difficult. Despite the kind thought, it practically became less comfortable for the horse.

The Pads are Back, the Pressure is On

Now it has become trendy again to use a neoprene or other additional pads under the already padded cavesson: on top of the nose ridge, under the jaw, at the sides…sometimes all together and it makes me kind of disappointed. These pads are seen on many dressage horses in competitions, also increasingly on famous ones. Why are they used? Shouldn´t we know better these days, that these extra paddings can mean less room for a good, relaxed mouth?

To keep an extra padding under the noseband or cavesson means it most likely becomes tighter than necessary. Some pads can also press on the muscles of the head, if the horse tries to open the mouth or resist the contact. This kind of pressure can become visible when the horse lifts or stretches the upper lip like in the “Flehmen/whinny” reaction. The passive pressure to M. Levator Labii Superioris can cause the lift as the muscle is attached in the upper lip with its tendinous end. This lifting function can even be seen in dissections by adding pressure on M.Levator Labii Superioris which travels under the M. Levator Nasolabialis, that covers the Infraorbital nerve area and several blood vessels.

Have a look at the embedded dissection video for the upper lip lifting test. The area under the cavesson is very sensitive and prefers room to function instead of extra padding and restrictions.

Using the cavesson and any other noseband should be kept simple. Correctly fitted and correctly used equipment can both look good and be fair for the horse.

If a noseband is fitted correctly and not used to mask rough riding and mouth problems of whatever origin, pads are completely dispensable.
Clarity of rules and guidelines together with good examples and ongoing education are needed in the future to take good care of dressage and the horses involved.

Related Links
Noseband Special: Part IV: The Thicker, the Wider, the Better?
On the Ignorance of Noseband Tightness and Vague FEI Noseband Rules
Effect of Noseband Positioning to Fascial and Neural Dynamics of the Head
A Pilot Study of Radiographs of Nasal Bones at the Usual Site of Nosebands
The Use of Nosebands in Equitation and the Merits of an FEI Equestrian Welfare and Safety Committee
An Investigation into Noseband Tightness Levels on Competition Horses