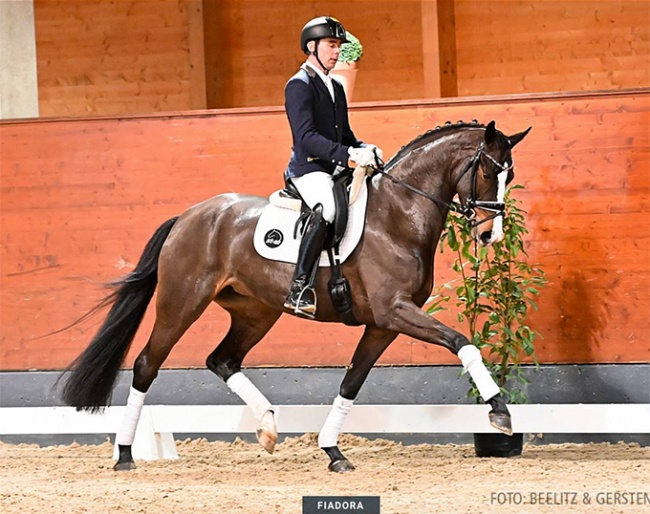 Fiadora, the price highlight horse of the first auction hosted by the Hanoverian society in 2022, has been secured for a French Olympic team rider.

The Verden Online Auction had a perfect start in January for which the bidding concluded on 22 January.

From the beginning of the online auction, Fiadora (by Fürsten-Look x Valentino), bred by Dr. Michael Lühs and owned by Anke Tonne-Lühs, Wagenfeld) was the favourite for the top price. Twenty-one bidders submitted 156 bids, with France competing versus Austria in the end.

She sold for 218,000 euro to France. She will go in training with Tokyo Olympian Maxime Collard, who trains with French judge Marietta Almasy.

The second most expensive horse was show jumper Light Up E (by Light On x Embassy).

The licensed stallion, bred and owned by Dirk and Lars Eggers, sold for 65,000 euro to a renowned stable in Lower Saxony.

The third best selling horse in the collection was Dance in Black (by Dancier x Furst Romancier), who sold for 45,000 euro to a German.

Almost half of the collection sold abroad: 30 of the 61 horses will leave Germany. There were buyers from the USA, Belgium, Finland, Switzerland, and Mexico.

The average price paid at the first auction of the year was 24,762 euro,  around 5,000 Euros more than the one from the previous year.