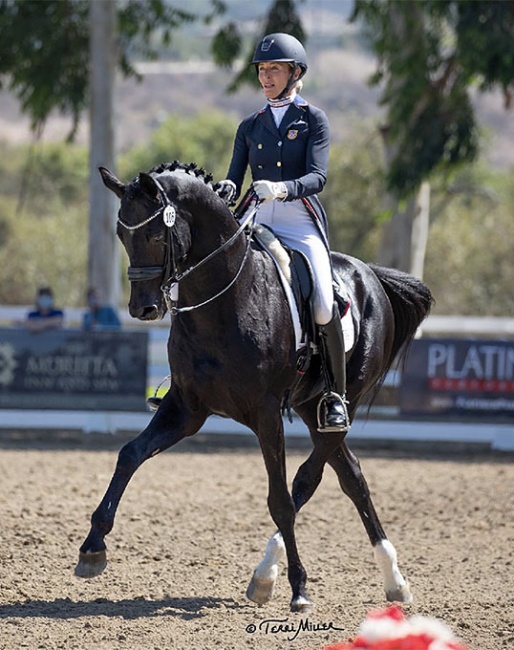 Grand Galaxy Win is a 2011 born stallion by Apache out of Winner T (by Jazz x Zeoliet). He is bred by A. Toonen Arts and was originally named "Galaxy Win T."

The black was approved at the 2014 KWPN Stallion Licensing, where Glamourdale was named champion.

At that time he was owned by Nico Witte in partnership with Andreas Helgstrand and the duo presented the stallion a month later at the 2014 Danish warmblood Stallion Licensing, where Galaxy Win T was named champion.

The stallion stayed in Denmark and was renamed Grand Galaxy Win. He made a brief return to Holland for the 2014 KWPN Autumn Stallion Performance Testing, where he scored 84 points.

The pair finished 8th in the 2015 Pavo Cup Finals for 4-year olds and second in the 2015 Danish Young Horse Championships.

An almost two year break from competition followed and Jurado and Grand Galaxy returned to the arena in August 2018 to win the qualifier for the Danish Young Horse Championships. In October 2018 they placed fifth at these Championships. It was the horse's last show in Europe.

Jost made her international show debut on the stallion in November 2020 at the CDI Thermal. She competed him at small tour level at two back-to-back CDI's and posted scores between 64 and 68%. Three months later she presented him in one CDI at the Global Dressage Festival in Wellington. They were fifth in the Prix St Georges with 69.500% but got rung out from the Inter I.

Jorst has returned to Wellington, Florida, to compete her horses at the 2022 Global Dressage Festival. She confirmed to Eurodressage that Grand Galaxy Win was gelded.

Charlotte, who acquired the stallion as a sport horse instead of a breeding stallion, explained that Grand Galaxy Win was gelded three weeks ago.

“Galaxy was so stressed coming to new places and with my traveling between Florida, California and Nevada he was so unhappy, loosing weight and trying desperately to maintain his herd, Jordt explained. “He’s already so much better.”