Alena Jenn: "What is Worse?" 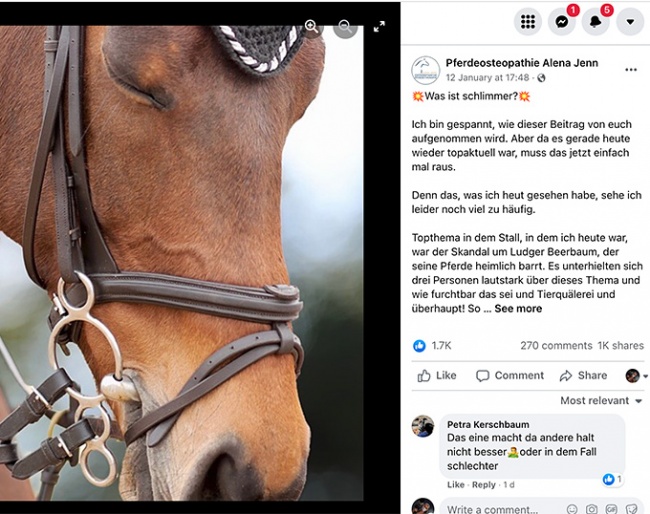 German equine osteopath Alena Jenn shared her views on animal cruelty in the wake of the Ludger Beerbaum rapping scandal that is making its way through the horse world following the airing of a documentary by the German RTL tv-station. It showed footage of a horse at Beerbaum's yard allegedly getting rapped in training. Also a pole with spikes was found by an undercover groom.

Jenn is based in Rastede, Germany, and holds a Bachelor degree in Biology from the University of Oldenburg. Since 2015 she is trained osteopathic horse therapist (Welter-Böller) and dry-needling therapist (Schachinger). She is a member of DGOP (Deutsche Gesellschaft für osteopathische Pferdetherapie).

I'm curious how this post will be received by you. However as the topic is hot at the moment, I have to utter this. Because what I saw today, I unfortunately see too often.

The hot topic in the barn today was the Ludger Beerbaum scandal, who secretly raps his horses. Three people talked loudly about this topic and how terrible it was and animal cruelty above all! After all, something like that is unacceptable.

Nearby a person his tacking a horse. While the saddle is being put on, the horse was repeatedly told to behave. The horse snapped in the air with ears flattened and rolled its eyes to give expression to its displeasure with the girth being buckled.

In the riding arena, things really got going. The same horse stuck out its tongue relatively quickly in the trot and finally blocked completely when the rider tried to canter. Also in the arena was a pony with such an obviously ill-fitting saddle that your back hurt just looking at it, and a tired-looking horse that could only be put into a jerky, stiff-legged trot with massive use of spurs and whip..

And now I seriously ask myself: isn't that equally worse as rapping a horse? Just because these riders think that they are not hurting their horse, even though it's written all over their horse's face. Back pain, stomach pain, joint pain, tooth pain.

Of course it is terrible what is done to the horses of these "top athletes". But the ignorance of many recreational (competition) riders causes their horses to suffer equally.

The dedicated rider and horse owner at least does not do it intentionally. But that doesn't make it any better for the horse. Maybe a contribution like this can at least help to stimulate some to think. That would be nice.

Related Links
Attitudes and Perceptions on Equine Training Techniques in an Online Discussion Forum
Is My Horse Difficult or In pain? Can Facial Expressions be Used to Determine the Presence of Pain?
Naughty Horse or Is He in Pain? The Answer is Written All over his Face