The Essential Guide to the Canter Pirouette - Part II: Pirouettes in Cavalry Manuals 1826 - 1912 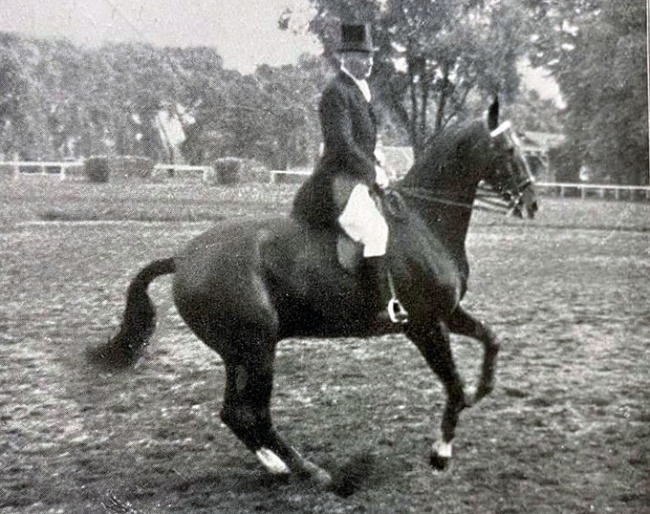 This article is a continuation of The Essential Guide to the Canter Pirouette - Part I: Origin Steeped in Military Training

For centuries the training of the horse was dominated by military aspects. Necessities of war, such as fast turns („en pirouette“) for attacks, for defense and for flight or the „carrier“ for the fastest possible transfer of news were required. At the same time the occupation with the horse and the riding developed to a cultural asset according the to the zeitgeist. With the use of horses for festivities and the increase of scientific findings the academic idea when training horses became more and more meaningful.

In the 19th century the cavalry still played a major part in all European armies and the one of Prussia turned out to be a most effective and much admired one on the continent. The pirouette in canter, also „short turn“, was required for individual battle and was thematized in every cavalry instruction of this century.

In the „Instruction for riding lessons for the Prussian cavalry“ of 1826 the third part treats the „short turn“: „This turn should principally be a fast and short throwing around of the horse on its hindquarters. (…)   The horse should be turned around „as hurried as possible around the stationary pivot point of the hindquarters (en pirouette). The initial pivot point is on this occasion on the inside hind-leg."

The manual stresses that with this movement health aspects have to be considered: „It is necessary to execute this movement with consideration of the conformation and strength of the horse and with the biggest possible protection because otherwise a damage of the hind-legs can easily be sustained.“

Three aspects of the execution of the pirouette in the cavalry instruction of 1926 are of special interest:

The transition from collected canter into the pirouette must have been a big problem which was mentioned in the succeeding cavalry manuals.The „Instruction for riding lessons for the cavalry“ of 1882 it is mentioned that „The short-turn in canter is an accelerated turn on the hindquarters. The forehand should turn around the inside hind-leg in one stride…The bigger the collection before the half halt, the more the outside leg (of the rider) secures the outside hind-leg (of the horse) the lighter the aids for the turn have to be applied.“

In this instruction of 1882 we can find the idea of animal welfare once again because it mentions the abandonment of the turning in just one stride under certain conditions: „Not all horses can execute the short turn with the same cleverness. Often one has to be continent with the turn on the hindquarters with the forehand turning in a few strides.“

The cavalry instruction of 1882 addresses quite rightly the problem of a too abrupt transition from the canter into the pirouette, like it still had been required in the previous instruction of 1826: „…without the biggest accordance of seat, legs and reins this exercise will at least be faulty, many times the horses get defiant. It is recommendable to slow down the horse for this turn with dominating outside aids to bring the hindquarters well under and subsequently lead the forehand around the hindquarters. Is there a longer break after the half halt to turn, the advantage of the collection (due to the half halt) usually subsides again.“

The sensitive and correct induction into the canter pirouette was briefly a problem in the 1990s and it looks like it could become one again at the moment. In the attempt to increasingly collect the horse before a canter pirouette, there is the danger that the horses changes already a few strides before the pirouette on the straight line into the four beat rhythm which after valid national and International rules is faulty.

In the Cavalry Manual of 1912 („Reitvorschrift 1912“) there are only brief indications how to execute the half turn, a half pirouette. „The short turn is a turn on the hindquarters. The horse is supposed to turn around the inside hind-leg in a few canter strides with a slightly raised forehand.“  The inducing half halt served the „stationing“ of the inside hind-leg and the increased collection. „In the aspiration to execute the movement quickly, the riders often do the mistake to pull too much on the inside rein and thereby push the hindquarters off the turn.

“The number of canter strides is determined by battle requirements: „In individual battle requires fastest turn from the cavalry horse. Therefore the short turn has to be exercised that it is executed in one stride. Not all horses will be able to do this though. The demand has to orientate itself at the conformation and degree of training.“

The cavalry manual of 1912 indicates the inducing half halt to prepare the half pirouette in several strides as well as of the too strong and faulty use of the inside rein during the fast execution in one stride. The hindquarters are still stationary.

That military riding and academic riding did not aim the same movements under the same term, becomes obvious in the booklet „Principals of dressage“ in the series of publication „The German cavalry manual from the viewpoint of equestrian art“ by Max Count from Redwitz (1858-1920). Von Redwitz writes: „The execution of the short turn like the instruction of 1882 requires it after which the horse has to turn in a single stride, is one foreseen for the use of weapons in the individual battle after the cavalry manual of 1912. From the academic viewpoint the turn of the horse in canter in one stride is faulty. For that reason the cavalry manual of 1912 requires that the horse turns in a few strides with a slightly raised forehand around the inside hind-leg.“

Von Redwitz addresses that the execution of the short turn in canter in several strides („en pirouette“) requires way too high skills of the croups and the ride ability of the cavalry horses. He stresses that even during „prize riding“ (a predecessor of dressage competition) only very rarely academic short turns in canter are shown and that one will dispense an academic execution anyway during an individual battle.

Von Redwitz differentiates here between the execution of the military turn during individual buzzes (in one stride) and the academic classical execution in competition in several strides.

The reference to the „French Drill Regulations“  seems interesting here: „In the practical sense the French Regulations considers that execution the most useful which leads the fastest and safest way to the goal.  For the ordinary rider it is without a doubt the turn on the middle hand (demi-tour sur place).  Shouldn’t the equestrian academic viewpoint here make a small concession?“

Adolf Schmidt (1840-1914), stable master and retired riding instructor of the Royal Bavarian Institution of Equitation gives a few remarkable indications regarding a gentle basic training of the horse in his book  of 1909, „New Sermons for Riding. Comparatives reviews on some old riding instructions and the principles of a scientifically founded equestrian art“.

Schmidt expresses his regrets that the reformulation of the riding instructions the progress of the science of equestrian art had been excluded and therefore the riding style of the military did not get improved in comparison to the instruction of 1828. Back then it was argument that „military riding has nothing to do with equestrian art; something like that is too high for the comprehension of soldiers.“

Adolf Schmidt refutes this claim with numerous arguments, for example: „The claim is wrong that military riding lacks equestrian art for the reason that equestrian art alone gives us the correct and most useful means to achieve our goals; because with its help we achieve our goal the fastest, the safest and with the biggest possible protection of our horses.“

Regarding the execution if the half canter pirouette Schmidt remarks: „Regarding the short turn it has to be said that it needs to be executed in place and in a way that the horse canters around the hind-leg which turns in place. The short turn is the fastest way to turn a horse. Because of that the horse needs to be able to come back from a free tempo in canter with the help of a few half halts to a canter in place and before it comes to canter in place, it should already be turned in the shortest tempo.“

The transition to the shortened tempo includes for Schmidt the induction of the turn into a more collected tempo so that the turn can be continued in regular strides, until the short turn is completed. A horse which turns in one stride, executes, in his opinion, the turn behind the bit. The request of the instruction of 1826 to slow down the horse as shortly as possible had led to horses halting. Nothing shows more clearly, according to Schmidt, which „progress“ equestrian had made in the meantime!