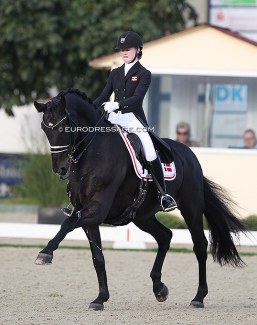 Romio Hojris is a 16-year old Danish warmblood by Romanov out of Donatell Hojris (by Don Schufro). He is bred by Betty Rasmussen.

The black gelding made his show debut as a 6-year old in Denmark in 2011 under Iben Dreyer, who competed him through 2014.

He sold to junior rider Emilie Holm Toft as her future young rider's horse. She briefly showed him in Denmark in 2015 at small tour level and once competed him at the 2015 CDI-YR in Odense.

She sold him to Danish junior Celine Rorbaek Silfen in the summer of 2015.

Rorbaek Silfen and Romio Hojris represented Denmark at the 2016 European Junior Riders Championships in Oliva Nova, where they were 6th in the Kur to Music.

At the 2017 European Young Riders Championships in Roosendaal, they were 6th in the team test but withdrew from the rest of the competition. A month later he did one class at a national show, but then disappeared from the show scene for 13 months, to return nationally in October 2018.

In 2019 Rorbaek Silfen and Romio won the Danish Young Riders Championships and returned on the Danish team for the European Young Riders Championships in San Giovanni in Marignano, where they were 10th in the individual test and 7th in the Kur to Music after a difficult start in the team test with a 57th place. It was their last international together.

The new duo had to postpone its CDI debut in 2020 due to the corona pandemic but first on the international centreline in Hagen in September 2020, finishing second three times. A year later they returned to the 2021 CDI Hagen to post three times above 70% but they were not selected on the Danish team for the 2021 European Junior Riders Championships.

The pair finished the year at the CDI Zakrzow in October 2021, where they were second twice and fourth in the Kur. At the three internationals they did, they never scored below 70%.

Struntze has focused on national level competitions so far. She last competed Dream of Dornik in March and Minerva Bijou (by Boomer) in July. Jasmin is yet to make her international show debut.