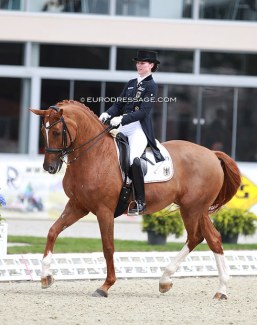 German Grand Prix rider Nadine Husenbeth said goodbye to her Under 25 team horse Florida. The mare was put to sleep on 10 November age 22.

Florida was a Rhinelander mare by Fidermark out of Gondolette (by Grosso Z x Adlerfels x Dolorit). She was bred by by Friedhelm Milthaler and owned by  Helga Stevens.

The mare was  shown by Ursel Körschgen in 2003 through 2006. In 2009 Klaus Husenbeth introduced her to S-level competition and a year later she made the transition to Grand Prix level

Nadine Husenbeth made her small tour show debut on Florida in November 2011 and jumped to Grand Prix in the autumn of 2012. In 2013 they won the 2013 German Under 25 Championships (Piaff Forderpreis) in Stuttgart.

Nadine Husenbeth and Florida have been a steady force on the international Under 25 scene from 2013 till 2016. They were members of the gold medal winning German team at the inaugural 2016 European Under 25 Championships in Hagen and placed fourth in the Kur to Music finals.

The pair's last competition was the CDI Wiesbaden in June 2017. She was retired from sport in November 2017.

The then 18-year old was supposed to get a special retirement ceremony during the gala evening of the 2017 Hanoverian Stallion licensing in Verden, but this happening was canceled last minute and no new ceremony was scheduled.

"She spent her retirement with us at home in the field with Piccolino and this year with my 3-year old hope," Nadine told Dressursport Deutschland. "Last Wednesday (10 November) she no longer wanted to get up despite all efforts from the vet. She gave up and with a heavy heart we decided to let her go. I learnt so much from her, had wonderful years and unique moments with her."