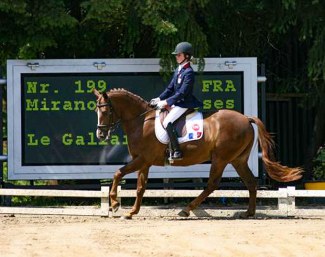 Dressprod reported that the former French dressage team pony Mirano des Etisses has passed away. He was 21 years old.

Mirano des Etisses was a Selle Français Pony gelding by Linaro out of  Histoire du Jardin (by Tonnerre d'Angrie). He was bred by Corinne Batillat.

Under Isabelle Legallais he won the 2003 French Young Pony Championships as a 3-year old and the three successive years he was the reserve champion as a 4, 5 and 6-year old.

Under Isabelle's 15-year old daughter Helene Legallais, the liver chestnut gelding made his international show debut in 2007 as a 7-year old. They first competed at the CDI Le Touquet in June 2007 and were selected on the French team for the 2007 European Pony Championships in Freudenberg (GER), where they were 34th in the team championship test.  They placed 11th in the consolation finals with 64.474%.

In Helene's last year on ponies, they competed in Weert, Wouwse Plantage, and Le Touquet but were selected as first reserves for the 2008 Europeans.

As Helene moved on to international junior riders' level on Unique, she kept training and competing pony Mirano at national level and showed him up to Grand Prix level by 2012.

In 2014 Mom Isabelle took over the ride and campaigned the 150 cm tall standing pony at Grand Prix level until August 2021 when he was 21 years old.

"We are completly devastated," Helene told Eurodressage. "He was super fit, but he contracted a severe colic attack last Friday, the only one he ever had in his life."