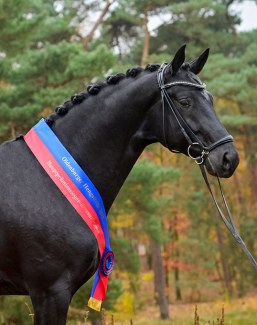 The title is awarded to the stallion which the best results in the stallion performance test, combined with the best impression left by the offspring on the Oldenburg foal inspection committee this year.

This year three stallions were invited for consideration: the 2017 born Total McLaren, the 2016 born Fynch Hatton, and the 2017 born Moreno.

He was a premium stallion at his stallion licensing in 2020. He completed his 14-day test in Denmark with a final score of 7.85 and his 35-day test, also in Denmark, with an overall score of 8.07.

In 2021, he was bronze medalist of the 4-year-old stallions at the Bundeschampionate in Warendorf.  There judge Gerd Sickinger described him as "a modern riding horse and a stallion with nobility, frame and uphill tendency".

His half brother Damon de Luxe OLD, born 2013, by Damon Hill is successful in advanced (S*) level dressage competitions with Kim Sarah Kleis in the saddle. Total McLaren produced the well-selling foals Teseo (by Total McLaren - De Niro) and Tribeca NY (by Total McLaren - For Romance I) at the Oldenburg Autumn Elite Auction.

Deja vu, dam of Total McLaren, participated in the 2012 Oldenburg Elite Mare Show in Rastede and was victorious in tests for young riding horses. Total McLaren has an important grand dam: Silberaster OLD. The Sandro Hit daughter was champion mare at the Elite Mare Show in Rastede in 2006 and won the gold medal at the Bundeschampionat of three-year-old riding horses in the same year and repeated her success at the same place as a four-year-old. In 2008 Silberaster got bronze at the World Championships for Young Dressage Horses in Verden.

The runner-up for the Main premium title was Fynch Hatton OLD, who is by Formel Eins out of Senorita Meyer (by Sir Donnerhall I - Weltmeyer), bred by Bernhard Ilting-Reuke, and owned by Helgstrand Dressage, Denmark.

The strong-moving stallion started his career in 2019 as the winner of the Oldenburg Saddle Licensing in Vechta and was the winner of the Regional Championships in Rastede at both three and four years old. In 2020, he completed his 35-day test in Denmark with an overall score of 8.49. Also in 2020, he triumphed as the winner at the Bundeschampionate for four-year-old stallions in Warendorf and in 2021 he finished second at the Danish Young Horse Championships. The stallion only began to stand at stud late after his saddle licensing in April 2019, which is why his first two foal crops count in the offspring evaluation.

Moreno OLD placed third in the Main Premium ring. He is by Morricone I out of Simone (by San Amour I - Diamond Hit), bred by Wilhelm Strohm and ownend by Gerd Sosath.

In 2019, he was a premium stallion at the Oldenburg Stallion Licensing in Vechta. In 2020 he was silver medalist at the Oldenburg Regional Championships in Rastede and excelled in the finals of the Bundeschampionat in Warendorf. He completed his 14-day test in Schlieckau with an overall score of 7.85. In 2021, Moreno successfully passed the Sport Test Part I in Münster-Handorf with a final score of 7.95, with all gaits scoring over eight.